Lythrum salicaria or purple loosestrife is a flowering plant belonging to the family Lythraceae. It should not be confused with other plants sharing the name loosestrife that are members of the family Primulaceae. Other names include spiked loosestrife and purple Lythrum.

Lythrum salicaria is a herbaceous perennial plant, that can grow 1–2 m tall, forming clonal colonies 1.5 m or more in width with numerous erect stems growing from a single woody root mass. The stems are reddish-purple or red to purple and square in cross-section. The leaves are lanceolate, 3–10 cm long and 5–15 mm broad, downy and sessile, and arranged opposite or in whorls of three.

The flowers are reddish purple, 10–20 mm diameter, with six petals (occasionally five) and 12 stamens, and are clustered tightly in the axils of bracts or leaves; there are three different flower types, with the stamens and style of different lengths, short, medium or long; each flower type can only be pollinated by one of the other types, not the same type, thus ensuring cross-pollination between different plants. The flowers are visited by many types of insects, and can be characterized by a generalized pollination syndrome.

The fruit is a small 3–4 mm capsule containing numerous minute seeds. Flowering lasts throughout the summer. When the seeds are mature, the leaves often turn bright red through dehydration in early autumn; the red colour may last for almost two weeks. The dead stalks from previous growing seasons are brown. 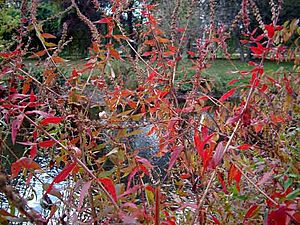 Bright crimson leaves at the onset of autumn

L. salicaria is very variable in leaf shape and degree of hairiness, and a number of subspecies and varieties have been described, but it is now generally regarded as monotypic with none of these variants being considered of botanical significance. The species Lythrum intermedium Ledeb. ex Colla is also now considered synonymous.

Found in ditches, wet meadows and marshes and along sides of lakes. 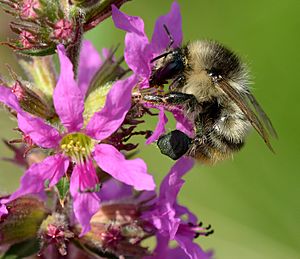 The flowers are pollinated by long-tongued insects, including bees and butterflies.

A number of insects use Lythrum salicaria as a food resource.

The black-margined loosestrife beetle Galerucella calmariensis is a brown beetle with a black line on its thorax. The adult feeds on the leaves of the plant, producing characteristic round holes. Its larvae destroy tender leaf buds and strip the tissue from the leaves. The golden loosestrife beetle Galerucella pusilla is nearly identical to G. calmariensis, but usually lacks the black thoracic line. Its feeding habits are also quite similar to the other leaf beetle.

The loosestrife root weevil Hylobius transversovittatus is a large red nocturnal weevil, which spends its nights feeding on leaves and leaf buds. The larvae emerge from their eggs and immediately burrow into the root of the plant, which they feed on continuously for over a year. This root damage stunts the plant's growth and ability to create seeds. If several larvae inhabit the same root, the plant can be killed.

The loosestrife flower weevil Nanophyes marmoratus is a tiny weevil which lays a single egg in each flower. When the larvae emerge they eat the flowers' ovaries, and the plant is unable to create seeds. The larvae usually proceed to hollow out the flower buds and use them as safe places to pupate.

It has been used as an astringent medicinal herb to treat diarrhea and dysentery; it is considered safe to use for all ages, including babies. It is also cultivated as an ornamental plant in gardens, and is particularly associated with damp, poorly drained locations such as marshes, bogs and watersides. However, it will tolerate drier conditions. The flowers are showy and bright, and a number of cultivars have been selected for variation in flower colour, including:

The cultivars ‘Blush’ with blush-pink flowers, and 'Feuerkerze' with rose-red flowers have gained the Royal Horticultural Society's Award of Garden Merit.

It has also been introduced in many areas of North America by bee keepers, due to its abundance of flowers which provide a large source of nectar. 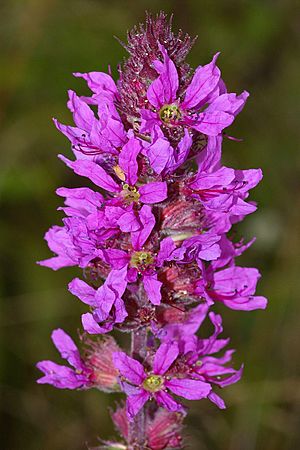 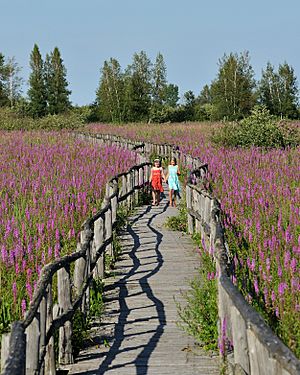 The purple loosestrife has been introduced into temperate New Zealand and North America where it is now widely naturalised and officially listed in some controlling agents. Infestations result in dramatic disruption in water flow in rivers and canals, and a sharp decline in biological diversity as native food and cover plant species, notably cattails, are completely crowded out, and the life cycles of organisms from waterfowl to amphibians to algae are affected. A single plant may produce up to 2.7 million tiny seeds annually. Easily carried by wind and water, the seeds germinate in moist soils after overwintering. The plant can also sprout anew from pieces of root left in the soil or water. Once established, loosestrife stands are difficult and costly to remove by mechanical and chemical means.

Plants marketed under the name "European wand loosestrife" (L. virgatum) are the same species despite the different name. In some cases the plants sold are sterile, which is preferable.

In North America, purple loosestrife may be distinguished from similar native plants (e.g., fireweed Chamerion angustifolium, blue vervain Verbena hastata, Liatris Liatris spp., and spiraea (Spiraea douglasii) by its angular stalks which are square in outline, as well as by its leaves, which are in pairs that alternate at right angle and are not serrated.

Purple loosestrife provides a model of successful biological pest control. Research began in 1985 and today the plant is managed well with a number of insects that feed on it. Five species of beetle use purple loosestrife as their natural food source and they can do significant damage to the plant. The beetles used as biological control agents include two species of leaf beetle: Galerucella calmariensis and Galerucella pusilla; and three species of weevil: Hylobius transversovittatus, Nanophyes breves, and Nanophyes marmoratus. Infestations of either of the Galerucella species is extremely effective in wiping out a stand of purple loosestrife, defoliating up to 100% of the plants in an area. The moth Ectropis crepuscularia is polyphagous and a pest species itself, and unsuitable for biological control.

All content from Kiddle encyclopedia articles (including the article images and facts) can be freely used under Attribution-ShareAlike license, unless stated otherwise. Cite this article:
Lythrum salicaria Facts for Kids. Kiddle Encyclopedia.