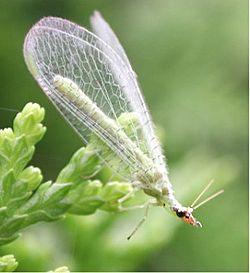 Lacewings are available from biocontrol dealers.

Biological control, or biological pest control, is the reduction of pest populations by using natural enemies. It is important because crop pests become resistant to chemical pesticides.

Natural enemies of insect pests include predators, parasitoids, and pathogens. Biological control agents of weeds include herbivores and plant pathogens. Predators, such as birds, lady beetles and lacewings, are free-living species that eat many prey during their lifetime.

Parasitoids are species whose larvae develop on or in a single insect host, ultimately killing or fatally infecting the host. Most have a very narrow host range. Many species of wasps and some flies are parasitoids.

Pathogens are disease-causing organisms including bacteria, fungi, and viruses. They kill or debilitate their host and are relatively specific.

A Chinese text from 304 AD, Records of the plants and trees of the southern regions, by Hsi Han, describes mandarin oranges protected by large reddish-yellow citrus ants. The ants attack and kill insect pests of the orange trees. The citrus ant (Oecophylla smaragdina) was rediscovered in the 20th century, and now is again used in China to protect orange groves.

All content from Kiddle encyclopedia articles (including the article images and facts) can be freely used under Attribution-ShareAlike license, unless stated otherwise. Cite this article:
Biological control Facts for Kids. Kiddle Encyclopedia.