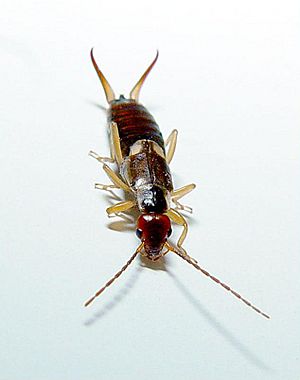 Earwigs is the name given to a group of insects (called Dermaptera). They are characterized by wings they can fold under short, leather-like forewings. There are about 1800 species of earwigs. They do not seem to spread any disease, or harm humans in any way. Most of them are 10-14mm long, some species can reach 80mm. Most earwigs are omnivores they also eat some insect larvae.

Earwigs live all over the world, except Antarctica. Earwigs usually live in damp, shady places such as under leaves or in fallen trees. Earwigs can also be found in your home, mostly in basements or bathrooms, where there are damp and shady places.

All earwigs eat plants. Earwigs eat pollen out from flowers. Some times fruit in the fall like apples. Some times when they live in houses they eat some of our pests like spiders and flies. Only some times they can get honey to eat. On trees you might find them eating moss or fungi. To eat insects an earwig has two choices, bad smell or its cerci (little pinchers). birds will usually avoid eating earwings due to their bad taste and smell.

All content from Kiddle encyclopedia articles (including the article images and facts) can be freely used under Attribution-ShareAlike license, unless stated otherwise. Cite this article:
Earwig Facts for Kids. Kiddle Encyclopedia.