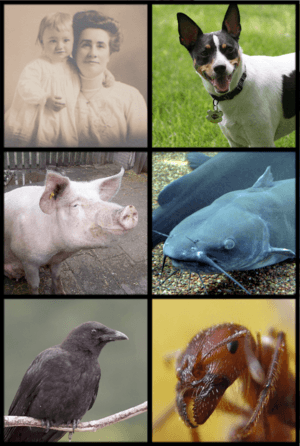 An omnivore is an animal whose species gets its energy and nutrients from a diet made up foods that include plants, animals, algae, fungi and bacteria.

Many omnivores change their eating habits during their life cycle. They are sometimes called "life-history omnivores", because they are only omnivores if their whole life is considered.

Some species, such as grazing waterfowl like geese, are known to eat mainly animals at one stage of their lives, but plants at another. Also, many insects, such as the beatle family Meloidae, eat animal tissue when they are larvae, but eat plant matter after they mature.

All of these animals are omnivores, but have different feeding behaviors and favorite foods. Being omnivores gives these animals more food security in stressful times. It also makes it easier for them to live in less consistent environments; (those that change along with the season, for example).

Humans and apes are omnivores: they eat fruits, vegetables and some meat. 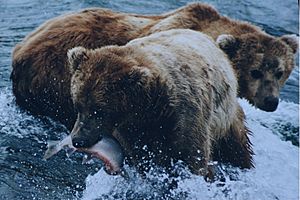 Most bear species are omnivores

All content from Kiddle encyclopedia articles (including the article images and facts) can be freely used under Attribution-ShareAlike license, unless stated otherwise. Cite this article:
Omnivore Facts for Kids. Kiddle Encyclopedia.