The first alligators existed about 37 million years ago. However, older species of alligators have become extinct. Alligators are native only to the United States and China. 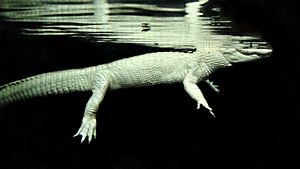 There are two kinds of white alligators which are albino and leucistic. These alligators are practically impossible to find in the wild. They could survive only in captivity and are few in number. The Aquarium of the Americas in New Orleans has leucistic alligators found in a Louisiana swamp in 1987.

Nobody knows how long alligators live, on average. An 80-year-old alligator named Muja, living in the Belgrade Zoo in Serbia, is thought to be the oldest alligator living in captivity. 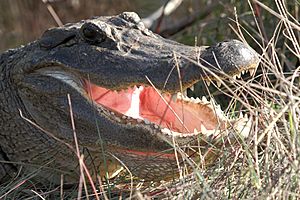 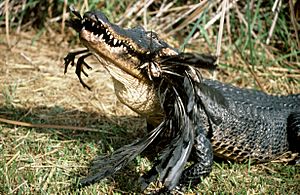 Although the alligator often moves slowly, it can run very fast for short times, especially in very short lunges. Usually, alligators' main prey are smaller animals they can kill and eat with a single bite. If the prey is not big enough to eat in one bite, they may drag the animal into the water to drown. They may also bite they prey and then spin or wildly until bite-sized chunks are torn off. This is called a "death roll".

Alligators are generally timid towards humans and tend to walk or swim away if a human comes near them. However, they will attack humans to protect their nests. In Florida, feeding wild alligators at any time is illegal. If fed, the alligators will eventually lose their fear of humans and will learn to associate humans with food, thereby becoming both a greater danger to people, and at greater risk from them. 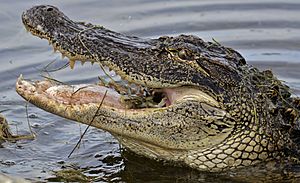 American alligators cannot live in saltwater very long because they do not have salt glands. Because of this, they live in freshwater environments, such as ponds, marshes, wetlands, rivers, lakes, and swamps, as well as in brackish environments. 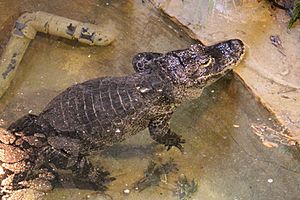 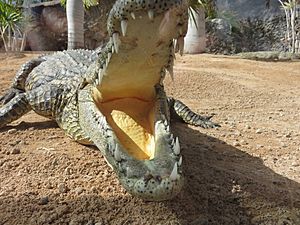 Large male alligators are solitary (individual) territorial animals. Smaller alligators can often be found in large numbers close to each other. The largest of the species (both males and females) defend prime territory; smaller alligators have a higher tolerance for other alligators within a similar size class.

Alligators move on land by two forms of locomotion referred to as "sprawl" and "high walk". The sprawl is a forward movement with the belly making contact with the ground and is used to transition to "high walk" or to slither over wet substrate into water. The high walk is an up on four limbs forward motion used for overland travel with the belly well up from the ground. Alligators have also been observed to rise up and balance on their hind legs and semi step forward as part of a forward or upward lunge. However they can not walk on their hind legs for long distances. 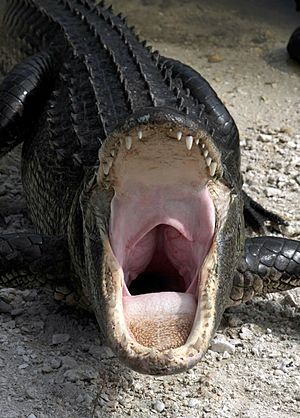 Although the alligator has a heavy body and a slow metabolism, it is capable of short bursts of speed, especially in very short lunges. Alligators' main prey are smaller animals they can kill and eat with a single bite. They may kill larger prey by grabbing it and dragging it into the water to drown.

Alligators consume food that can not be eaten in one bite by allowing it to rot, or by biting and then spinning or convulsing wildly until bite-sized chunks are torn off. This is referred to as a "death roll". Critical to the alligator's ability to initiate a death roll, the tail must flex to a significant angle relative to its body. An alligator with an immobilized tail cannot perform a death roll.

Most of the muscle in an alligator's jaw evolved to bite and grip prey. The muscles that close the jaws are exceptionally powerful, but the muscles for opening their jaws are comparatively weak. As a result, an adult human can hold an alligator's jaws shut bare-handed. It is common today to use several wraps of duct tape to prevent an adult alligator from opening its jaws when being handled or transported.

Alligators are generally timid towards humans and tend to walk or swim away if one approaches. This has led some people to the practice of approaching alligators and their nests in a manner that may provoke the animals into attacking. In Florida, feeding wild alligators at any time is illegal. If fed, the alligators will eventually lose their fear of humans and will learn to associate humans with food, thereby becoming both a greater danger to people, and at greater risk from them. 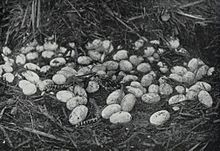 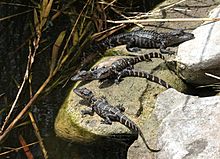 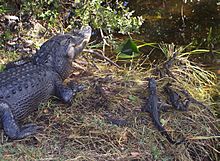 Alligators generally mature at a length of 6 ft (1.8 m). The mating season is in late spring. In April and May, alligators form so-called "bellowing choruses". Large groups of animals bellow together for a few minutes a few times a day, usually one to three hours after sunrise. The bellows of male American alligators are accompanied by powerful blasts of infrasound. Another form of male display is a loud head-slap. Recently, on spring nights alligators were found to gather in large numbers for group courtship, the so-called "alligator dances".

In summer, the female builds a nest of vegetation where the decomposition of the vegetation provides the heat needed to incubate the eggs. The sex of the offspring is determined by the temperature in the nest and is fixed within seven to 21 days of the start of incubation. Incubation temperatures of 86 °F (30 °C) or lower produce a clutch of females; those of 93 °F (34 °C) or higher produce entirely males. Nests constructed on leaves are hotter than those constructed on wet marsh, so the former tend to produce males and the latter, females. The baby alligator's egg tooth helps it get out of its egg during hatching time.

The natural sex ratio at hatching is five females to one male. Females hatched from eggs incubated at 86 °F (30 °C) weigh significantly more than males hatched from eggs incubated at 93 °F (34 °C). The mother defends the nest from predators and assists the hatchlings to water. She will provide protection to the young for about a year if they remain in the area. The largest threat to the young are adult alligators. Predation by adults on young can account for a mortality rate of up to 50% in the first year. In the past, immediately following the outlawing of alligator hunting, populations rebounded quickly due to the suppressed number of adults preying upon juveniles, increasing survival among the young alligators. 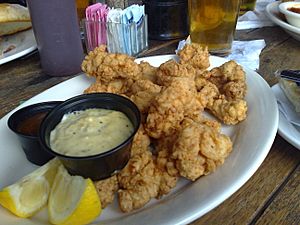 Alligators are raised commercially for their meat and skin, which is used for bags and shoes. They also provide economic benefits through the ecotourism industry. Visitors may take swamp tours, in which alligators are a feature. Their most important economic benefit to humans may be the control of coypu and muskrats. Louisiana spends millions of dollars of bounty money to control coypu using alligators.

Alligator meat is also consumed by humans, the flesh of the alligator is characterised as fish. 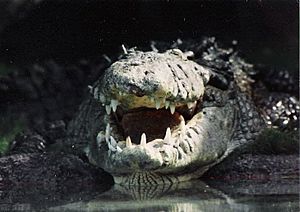 Their goal is to prevent people from killing endangered crocodiles and caimans because they have mistaken an alligator for a crocodile or caiman. Because of this, killing alligators, and trading in products made from alligator meat or skin, are all regulated by the Fish and Wildlife Service.

All content from Kiddle encyclopedia articles (including the article images and facts) can be freely used under Attribution-ShareAlike license, unless stated otherwise. Cite this article:
Alligator Facts for Kids. Kiddle Encyclopedia.