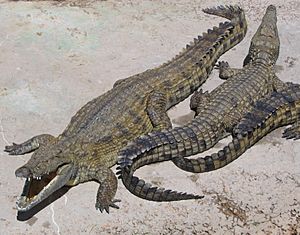 The Order Crocodilia is a group of Archosaur reptiles. There are three living families.

Crocodiles are the nearest living relatives to birds, because they are both survivors of the Archosaurs.

Crocodiles are first found in the Upper Cretaceous period. They are descendents of a much wider group of Archosaurs called the Crocodylomorphs. These, in the Upper Triassic, were slender land-living forms, the sister group of the dinosaurs.

The Crocodylomorphs, in turn, were part of an even larger group, the Crurotarsi, which are first seen early in the Triassic.

All content from Kiddle encyclopedia articles (including the article images and facts) can be freely used under Attribution-ShareAlike license, unless stated otherwise. Cite this article:
Crocodilia Facts for Kids. Kiddle Encyclopedia.