The period before the Triassic was the Permian period, the last period in the Palaeozoic era. The Jurassic period came after the Triassic.

Many new groups arose during the Triassic period, including the dinosaurs and the first mammals.

The Triassic had several more extinction events, whose causes are also unknown. The most significant of these took place at the end of the Triassic, which was one of the 'big five' Phanerozoic marine extinctions.

On average, the Triassic's climate was very different from today's: 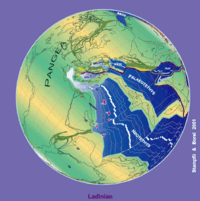 During the Triassic period, there were no separate continents like there are today. Almost all the Earth's land mass was together in a single supercontinent called Pangaea ("all the land"). Pangaea was centered more or less on the equator. All the deep-ocean sediments (the things that settled at the bottom of the ocean) had disappeared. This happened because oceanic plates moved sideways and downward until they were finally on top of each other, or under each other.

The supercontinent Pangaea was rifting during the Triassic – especially late in the period – but had not yet separated into different continents.

Being a super-continental land mass, Pangaea had limited shoreline. Because of this, Triassic marine deposits – fossils from Triassic ocean life – are rare in most of the world. In North America, for example, marine deposits are limited to a few exposures in the west. However, they are common in Western Europe, where the Triassic was first studied.

The first part of the Triassic had much less variety than the Permian, and showed signs of a deteriorated environment. This situation lasted for about 5 million years, then steadily improved. Into the vacant ecological niches, new forms evolved, replacing old with new. This rapid adaptive radiation happened to the reptiles on land, the fish in the seas, and a number of other groups, like the insects. Diverse communities with complex ecology took 30 million years to re-establish.

Many reptile groups first appeared during the Triassic period, possibly because so many niches were vacant at the time. Some of these new groups died out in the End–Triassic extinction event, but those that survived ruled the Earth for the rest of the Mesozoic. Examples include:

This was a major change, because in the middle Triassic period, the Synapsids (mammals' ancestors) were still dominant.

Many reptile groups became extinct during the Triassic, including:p. 41

Also, amongst the Synapsids (which used to be called mammal-like reptiles), the Dicynodonts died out during the end-Triassic extinction.p. 41

The Triassic was a period of great change in tetrapods: many new and important groups appeared, but many others became extinct. Of all the periods in the Mesozoic era, there are the least number of fossils from the Triassic period. This makes it difficult for scientists to explain these events.

All content from Kiddle encyclopedia articles (including the article images and facts) can be freely used under Attribution-ShareAlike license, unless stated otherwise. Cite this article:
Triassic Facts for Kids. Kiddle Encyclopedia.