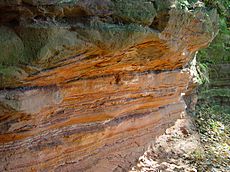 Sandstone from the Lower Triassic epoch 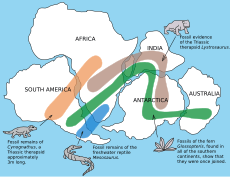 Geographical distribution of Lystrosaurus      and contemporary fossils in Gondwana.

The Lower Triassic was called the Scythian stage, which can be found in older literature. In Europe, most of the Lower Triassic is composed of sandstone. It is a lithostratigraphic unit of continental red beds. They were formed on land under desert conditions.

The massive extinctions that ended the Paleozoic era caused extreme hardship for the surviving species. Many types of corals, brachiopods, molluscs, echinoderms, and other invertebrates had completely disappeared. The most common hard-shelled marine invertebrates were bivalves, gastropods, ammonites, echinoids, and a few articulate brachiopods. The most common land animal was the herbivorous synapsid Lystrosaurus.

The earliest Triassic faunas lacked biodiversity and were like that throughout the epoch. Recovery on land took 30 million years.

The first ichthyosaurs evolved in this epoch.

The climate during the Lower Triassic (especially in the interior of the supercontinent Pangaea) was generally dry. Deserts were widespread. The poles had a temperate climate. The relatively hot climate of the epoch may have been caused by widespread volcanic eruptions.

All content from Kiddle encyclopedia articles (including the article images and facts) can be freely used under Attribution-ShareAlike license, unless stated otherwise. Cite this article:
Lower Triassic Facts for Kids. Kiddle Encyclopedia.