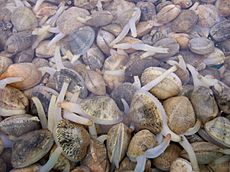 A large number of venerid bivalves with their siphons visible 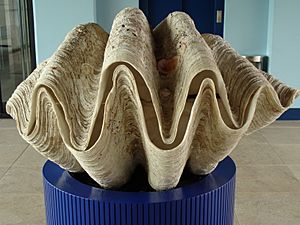 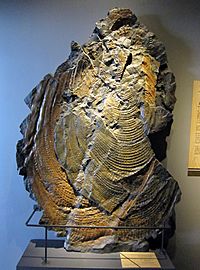 The world's largest clam (187 cms), a Sphenoceramus steenstrupi fossil from Greenland in the Geological Museum in Copenhagen

The bivalves are a large class of molluscs, also known as pelecypods.

They have a hard calcareous shell made of two parts or 'valves'. The soft parts are inside the shell. The shell is usually bilaterally symmetrical.

There are over 30,000 species of bivalves, including the fossil species. There are about 9,200 living species in 1,260 genera and 106 families. All of them live in the water, most of them in the sea or in brackish water. Some live in fresh water. All are filter feeders: they lost their radula in the course of evolution. A few are carnivorous, eating much larger prey than the tiny microalgae eaten by other bivalves.

The best known examples of bivalves are clams, mussels, scallops and oysters.

The shells are usually held shut by strong adductor muscles. Scallops can use their muscles to flap the valves and swim.

A bivalve takes in water that has plankton and other things floating in it.

Some (but not all) molluscs have a part of their mantle known as the siphon (a tube). Siphons, if they exist, come in pairs, one to suck in, one to expel.

Anything that is small enough to fit inside the hole of its incurrent siphon enters the bivalve. When the floating material comes in, it gets stuck in slimy mucus that is on the surface of the bivalve's gills. The food is moved down to the mouth, which is on the other side of the siphon. Food is digested in the bivalve's stomach and intestine, and everything that is not digested goes out through the other siphon, with water.

The siphons are an adaptation of burrowing molluscs. Those that live above the substrate (sediment), such as scallops and oysters, do not need them.

There are four feeding types, defined by their gill structure:

As a group, the bivalves are adapted to penetrate into, and to move along horizontally along, soft ground such as mud and sand. Common examples of this are razor shells, which can dig themselves into the sand with great speed to escape enemies, and cockles.

Scallops and file clams can swim to escape a predator, clapping their valves together to create a jet of water. Cockles can use their foot to leap from danger. However these methods quickly exhaust the animal. In the razor shells the siphons can break off only to grow back later.

The file shells can produce a noxious secretion when threatened, and the fan shells of the same family have a unique, acid-producing organ.

Bivalves are superficially similar to brachiopods, but the construction of the shell is completely different in the two groups. In brachiopods, the two valves are on the dorsal and ventral surfaces of the body, while in bivalves, they are on the left and right sides.

Bivalves appeared late in the Cambrian explosion and came to increase in the Palaeozoic, and dominate over brachiopods during the Mesozoic. So, it was thought that bivalves are better adapted to aquatic life than the brachiopods, and this caused brachiopods to be out-competed and relegated to minor niches.

However, after the Permian-Triassic extinction event bivalves had a huge adaptive radiation while brachiopods were devastated, losing 95% of their diversity.

"The supposed replacement of brachiopods by clams is not gradual and sequential. It is a product of one event: the Permian extinction (which affected brachiopods profoundly and clams relatively little)".

The upshot was that bivalves took over the desirable inshore habitats. Brachiopods now live in deeper waters where food is scarcer.

All content from Kiddle encyclopedia articles (including the article images and facts) can be freely used under Attribution-ShareAlike license, unless stated otherwise. Cite this article:
Bivalve Facts for Kids. Kiddle Encyclopedia.