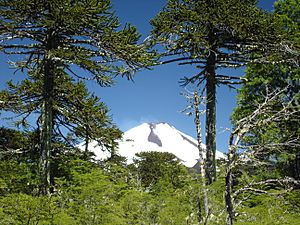 Conifers were the dominant terrestrial plants for most of the Mesozoic. Flowering plants appeared late in the era but did not become widespread until the Cenozoic.

The Mesozoic was the geological era in which dinosaurs lived, among with other animals. It lasted around 186 million years, starting 252.2 mya (million years ago) with the P/Tr extinction and ending 66 mya with the K/T extinction (the one that killed dinosaurs).

Dinosaurs appeared around 231 mya (21 million years after the beginning of the Mesozoic). They evolved from early reptiles called the archosaurs (a group of which modern birds and crocodiles are still part).

The Mesozoic is the middle of the three eras that make up the Phanerozoic eon. Before the Mesozoic was the Palaeozoic era. The K/T extinction in 66 mya also marks the beginning of the Cenozoic era, the one we live in.

The three Mesozoic periods were:

All content from Kiddle encyclopedia articles (including the article images and facts) can be freely used under Attribution-ShareAlike license, unless stated otherwise. Cite this article:
Mesozoic Facts for Kids. Kiddle Encyclopedia.