A scallop is a marine bivalve mollusc of the family Pectinidae. Scallops live in all the world's oceans.

This is one of the largest families of living bivalves. There are over 300 living species of scallop. Their main adaptation is the ability to swim by clapping their valves together. In this way they escape from most of their predators.

They have a good reputation as a food source. As bivalves they have two shells. The lower shell is usually white (about 95%). It can also be orange (4%) or Lemon Yellow (1%).

The name "scallop" comes from the Old French escalope, which means "shell". Their shells can be up to 15 centimetres (6 inches) across.

1. Their ability to swim. However, a few species attach to rocks as adults by a filament. Most species lie on sandy beds, and swim off when touched by a starfish or other predator.

2. They have eyes round the edges of their mantle. Their eyes cannot see shapes, but they can detect changing patterns of light and motion. The scallop eyes fringing the edge of its shell detect moving objects as they pass successive eyes.

3. Semi-circular ridged shape to shells. The shells are similar, and fit closely together.

4. At some stage in their lives, all scallops all have a ridge of tiny teeth near the notch where the byssus comes out in other bivalves. This is called the ctenolium. Its importance is that only scallops have it, and it can be seen in fossils. So that tells palaeontologists when they have a fossil scallop. 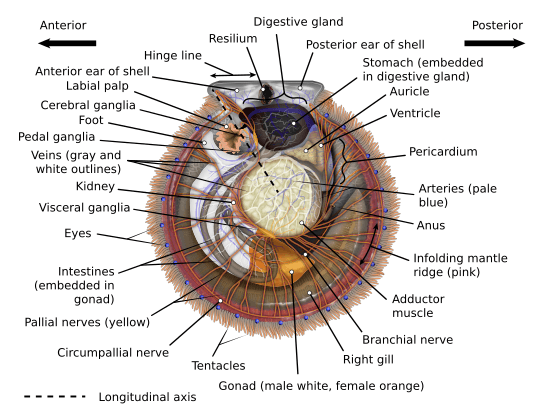 Most scallops are filter feeders. They eat plankton. The plankton sometimes has scallop larvae in it. Siphons bring water over a filtering structure. Mucus then traps the food. Next, the cilia on the structure moves the food to the mouth. Then, the scallop digests the food in the stomach and digestive gland. Waste goes through the intestine and exits through the anus.

Some scallops, such as the Atlantic bay scallop Argopecten irradians do not live for a long time. Others can live 20 years or more. One can estimate their age from the annuli, the concentric rings on their shells.

The scallop family is unusual because of the variety in arrangements for sexual reproduction. In some species, a scallop has only one sex. They are either male or female. Other species are hermaphrodites so a single scallop has both male and female reproductive organs at the same time. A few scallops are male when they are young and they become female when they grow older.

Red roe comes from female scallops. White roe comes from males. Scallops release Spermatozoa and ova freely into the water during the mating season. Fertilized ova sink to the bottom. The immature scallop hatches after a few weeks. The larvae drift in the plankton until they go to the bottom again to grow. They may attach by means of byssal threads.

There are many Pectinidae species, living and fossil. True Pectinidae (ones with a ctenolium) first appeared in the Upper or Middle Triassic over 200 million years ago (mya), and perhaps as early as 240 mya.

The Pectinidae family had a large number of species in the Mesozoic era, but they almost disappeared at the end of the Cretaceous period. The survivors evolved rapidly during the Tertiary period. There are nearly 7,000 species and subspecies for the fossil and recent Pectinidae.

The evolution of bivalves that swim is a consequence of the so-called "Mesozoic marine revolution". In the Mesozoic era sea-floor predators evolved various new forms which fed on the abundant shellfish (brachiopods and bivalves). These predators are still abundant today: they are mostly the starfish, the gastropods, and the crabs.

Each predator has its own methods. Crabs break the shells by force. Some gastropods make holes in the shell and put in a paralysing or relaxing substance; others work on small cracks in the edge of the shell. Once they get their proboscis in, they eat the shellfish.

Starfish are the most common predators. The shells of brachiopods and bivalves are held together by strong muscles. What the starfish does is clamp hold of them on either side with its tube feet, and apply a steady pull. The starfish, with its muscles and hydraulic system, can pull for much longer than any bivalve muscle can withstand. Apparently, ten minutes are usually enough to open the shell a bit. Then the starfish slips its stomach inside the shell. The stomach can get through a slot as narrow as 0.1mm. The starfish then dissolves the mollusc where it lives, absorbing the nutrients.

Consequently, there was a great reproductive advantage for any prey which had even the slightest defence to these predators. Many shellfish developed extra-tough shells. Some burrowed into the sand. Scallops must had had some elementary movement, which developed rapidly under selection. They became extremely common in the Mesozoic. There are some other methods used by a few scallops. Chlamys hastata often carry sponges on their shell. It is a kind of mutualism. The sponge makes it difficult for starfish to get their tube feet on, and camouflages Chlamys hastata from predators.

Studies have shown the Pectinidae family is monophyletic, developing from a single common ancestor. The direct ancestors of Pectinidae were scallop-like bivalves of the family Entoliidae.

The largest wild scallop fishery is for the Atlantic sea scallop (Placopecten magellanicus) off northeastern United States and eastern Canada. Most of the rest of the world's production of scallops is from Japan (wild, enhanced, and aquaculture), and China (mostly cultured Atlantic bay scallops). In 2005, China accounted for 80% of the global scallop and pecten catch, according to a Food and Agriculture Organization (FAO) study.

Scallops are popular in both Eastern and Western cooking. They have two types of meat in one shell. The adductor muscle is white and meaty. The roe, called "coral", is red, orange or white and soft.

In Western cuisine, scallops are often sautéed in butter, or breaded and deep fried. The byssus (also called the beard) is often tough. It is usually discarded or used later on for stock. Sometimes, markets sell scallops already prepared in the shell, with only the adductor muscle. Outside the U.S. the scallop is often sold whole, and people eat the adductor muscle and roe.

In Japanese cuisine, scallops may be served in soup or prepared as sashimi or sushi. In a sushi bar, hotategai (帆立貝, 海扇) is the traditional scallop on rice. Kaibashira (貝柱) might be scallop, but it can also be the adductor muscle of any kind of shellfish, such as mussels, oysters, or clams. In Cantonese Chinese cuisine dried scallop is called conpoy (乾瑤柱, 乾貝, 干貝).

A pilgrim with a scallop shell

The scallop shell is the traditional emblem of James, son of Zebedee. It is popular with pilgrims on the Way of St James to the apostle's shrine at Santiago de Compostela in Spain.

Aphrodite in a sea shell, now in the Louvre

Throughout antiquity, scallops and other hinged shells have symbolized the feminine principle. Many paintings of Venus, the Roman goddess of love and fertility, included a scallop shell in the painting to identify her. This is clear in Botticelli's classically inspired The Birth of Venus

Use as a design

Heraldry included the scallop shell symbol as a badge for people who had made the pilgrimage to Compostela. Later it became a symbol of pilgrimage in general. Winston Churchill's family coat of arms includes scallops. However, symbols in heraldry do not always have the same meaning. Sometimes no family member has been on a pilgrimage but there are still scallops on the coat of arms.

Over 45 communes of France have one or more scallop shells on their coat of arms.

The U.S. state of New York has had the Atlantic bay scallop as its state shell since 1988. In design, scalloped edges or ridges means a wavy pattern which reminds people of the edge of a scallop's shell. Shell petroleum company has had a logo with a scallop shell on it since 1904.

All content from Kiddle encyclopedia articles (including the article images and facts) can be freely used under Attribution-ShareAlike license, unless stated otherwise. Cite this article:
Scallop Facts for Kids. Kiddle Encyclopedia.