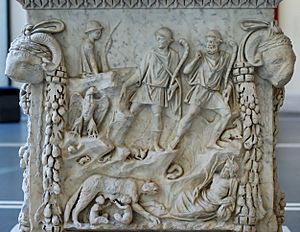 Romulus and Remus, the Lupercal, Father Tiber, and the Palatine on a relief from a pedestal dating to the reign of Trajan (AD 98–117)

Roman mythology is a large collection of stories, started in Ancient Rome, about the beginning of the world, and the lives and adventures of lots of gods, goddesses, heroes, and heroines.

The gods and goddesses in these stories have lots of magic powers. They can make themselves invisible to humans and move to any place in a very short amount of time. The gods and goddesses also never get sick and can only be hurt by very unusual causes. This is called being immortal. Immortal means the God or Goddess can never die.

All content from Kiddle encyclopedia articles (including the article images and facts) can be freely used under Attribution-ShareAlike license, unless stated otherwise. Cite this article:
Roman mythology Facts for Kids. Kiddle Encyclopedia.