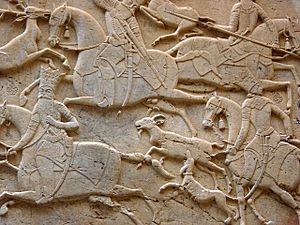 Persian relief from Qajar era in the style of Persepolis, located at Tangeh Savashi.

Relief is a way of making sculptures or carvings. You start with a flat stone or wooden base, and take small parts away until you have made the art you want.

Reliefs are found around the world. They can be used to decorate buildings, such as temples. Usually the artist makes reliefs of figures, such as people or animals. 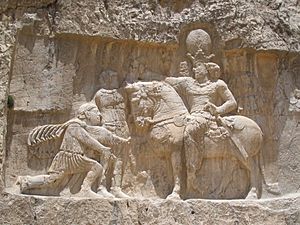 Rock relief at Naqsh-e Rustam; the Persian Sassanian emperor Shapur I (on horseback) with Roman emperors submitting to him

In bas-relief, only a bit of the base is taken away. The figure is quite flat and this is especially common in friezes. An alto-relief is where the artist takes away a lot of the base material. This can be very detailed.

All content from Kiddle encyclopedia articles (including the article images and facts) can be freely used under Attribution-ShareAlike license, unless stated otherwise. Cite this article:
Relief Facts for Kids. Kiddle Encyclopedia.