Metalworking is the shaping of metals to create single parts, assemblies, or large scale buildings/objects. There are many ways of shaping metal, including machining, forging, casting, and fabricating. Humans have been working metal for close to 7000 years. 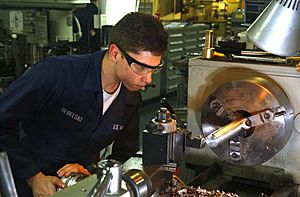 Milling is the complex shaping of metal (or possibly other materials) parts, by removing unneeded material to form the final shape. It is generally done on a milling machine, a power-driven machine that in its basic form is comprised of a milling cutter that rotates about the spindle axis (like a drill), and a worktable that can move in multiple directions (usually three dimensions [x,y,z axis] relative to the workpiece, whereas a drill can only move in one dimension [z axis] while cutting). The motion across the surface of the workpiece is usually accomplished by moving the table on which the workpiece is mounted, in the x and y directions. Milling machines may be operated manually or under computer numerical control (CNC), and can perform a vast number of complex operations, such as slot cutting, planing, drilling and threading, rabbeting, routing, etc. Two common types of millers are the horizontal miller and vertical miller. 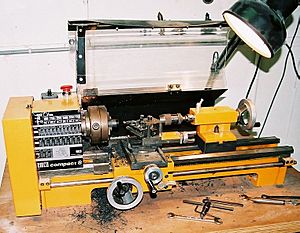 A lathe is a machine tool which spins a block of material so that when abrasive, cutting, or deformation tools are applied to the workpiece, it can be shaped to produce an object which has rotational symmetry about an axis of rotation, called Solids of Revolution. Examples of objects that can be produced on a lathe include candlestick holders, table legs, bowls, baseball bats, crankshafts or camshafts.

The material may be held in place by a chuck or worked between one or two centers of which at least one can be moved horizontally to accommodate varying material lengths. In a metalworking lathe, metal is removed from the workpiece using a hardened cutting tool which is usually fixed to a solid moveable mounting called the "toolpost", this arrangement is then moved around the workpiece using handwheels and/or computer controlled motors. The main difference between the Milling Machine and the Lathe is that in the Milling Machine the tool is moving but in the Lathe, the work is moving. Modern CNC lathes can do secondary operations like milling in X,Y,Z direction by using driven tools also called live tools. When driven tools are used the work piece stops rotating and the driven tool executes the machining operation with a rotating cutting tool. Driven tools increase machining performance as all operations can be made in one set up in the CNC lathe.

There are many technologies available to cut metal. Sawing, chisel, shearing, burning by Laser, gas jet and plasma, erosion by water jet or electric discharge, and hand cutting. Cutting fluid or coolant are introduced by a spray across the face of the tool and piece to decrease the temperature caused by friction and to prevent tool point weld. 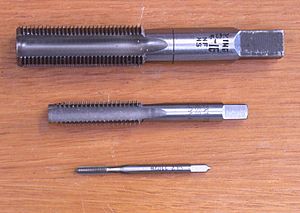 Drilling is the process of using a drill bit in a drill to produce holes. Under normal usage, swarf is carried up and away from the tip of the drill bit by the fluting. The continued production of chips from the cutting edges pushes the older chips outwards from the hole. This continues until the chips pack too tightly, either because of deeper than normal holes or insufficient backing off (removing the drill slightly [breaking the chip] or totally from the hole [clearing the bit] while drilling). Lubricants (or coolants) (i.e. cutting fluid) are sometimes used to ease this problem and to prolong the tool's life by cooling, lubricating the tip and improving chip flow.

Taps and dies are tools commonly used for the cutting of screw threads in metal parts. A tap is used to cut a female thread on the inside surface of a predrilled hole, while a die cuts a male thread on a preformed cylindrical rod. 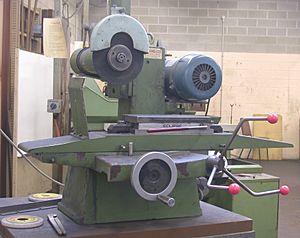 Grinding uses an abrasive process to remove material from the workpiece. A grinding machine is a machine tool used for producing very fine finishes, making very light cuts, or high precision forms using a abrasive wheel as the cutting device. This wheel can be made up of various sizes and types of stones, diamonds or inorganic materials.

The simplest grinder is a bench grinder or a hand-held angle grinder, for deburring parts or cutting metal with a zip-disc.

Grinders have increased in size and complexity with advances in time and technology. From the old days of a manual toolroom grinder sharpening endmills for a production shop, to today's 30000rpm CNC auto-loading manufacturing cell producing jet turbines, grinding processes vary greatly.

In the past grinders were used for finishing operations only because of limitations of tooling. Modern grinding wheel materials and the use of industrial diamonds or other made-made coatings (cubic boron nitride) on wheel forms have allowed grinders to achieve excellent results in production environments instead of being relegated to the back of the shop.

These processes modify the shape of the object being formed, without removing any material. 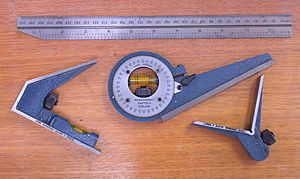 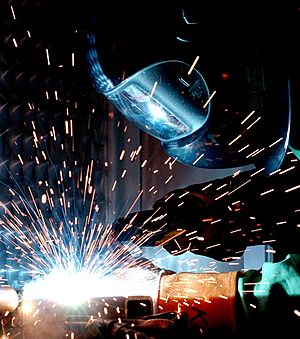 Welding is a fabrication process that joins materials, usually metals or thermoplastics, by causing coalescence. This is often done by melting the workpieces and adding a filler material to form a pool of molten material that cools to become a strong joint, but sometimes pressure is used in conjunction with heat, or by itself, to produce the weld.

Many different energy sources can be used for welding, including a gas flame, an electric arc, a laser, an electron beam, friction, and ultrasound. While often an industrial process, welding can be done in many different environments, including open air, underwater and in space. Regardless of location, however, welding remains dangerous, and precautions must be taken to avoid burns, electric shock, poisonous fumes, and overexposure to ultraviolet light.

Brazing is a joining process in which a filler metal is melted and drawn into a capillary formed by the assembly of two or more work pieces. The filler metal reacts metallurgically with the workpiece(s) and solidifies in the capillary, forming a strong joint. Unlike welding, the work piece is not melted. Brazing is similar to soldering, but occurs at temperature higher than 800F. Brazing has the advantage of producing less thermal stresses than welding, and brazed assemblies tend to be more ductile than weldments because alloying elements can not segregate and precipitate.

Soldering is a joining process that occurs below 800F. It is similar to brazing in the fact that a filler is melted and drawn into a capillary to form a join. However, in soldering, the metallurgical reaction between filler and work piece is minimal, resulting in a weaker joint.

A wide variety of hand and small power tools are often used for metalworking, and an experienced machinist can fabricate almost any part using only hand tools, although it may require more time than with advanced machinery. Many types of hand tools are used, including cutting and scraping tools to remove metal, impact tools to reshape metal, and a wide variety of tools for marking, positioning, or otherwise assisting the fabrication process.

All content from Kiddle encyclopedia articles (including the article images and facts) can be freely used under Attribution-ShareAlike license, unless stated otherwise. Cite this article:
Metalworking Facts for Kids. Kiddle Encyclopedia.