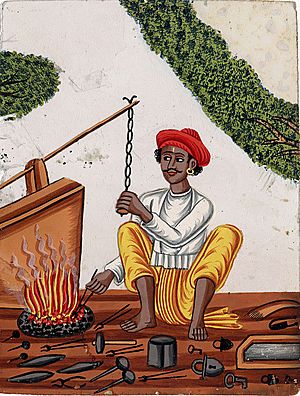 A smith is a person who works in metal. A blacksmith works with iron and steel. A thousand years ago, people only knew about seven metals (iron, gold, silver, copper, tin, lead, and mercury). By color: gold is yellow; copper is red; and silver, tin, lead, and mercury are different gray colors. Iron is also a gray color if you shine it, but usually its surface is covered with a black oxide, which is a kind of rust. This black color forms very fast in a blacksmith's fire. The other metals have light colors, but iron is a dark color, so it is called the black metal in English. A smith who works the black metal is a black-smith.

A farrier works with iron like a blacksmith. The only ironwork a farrier does is to make horseshoes.

The first blacksmiths were Hittites. They started working iron to make tools around 1500 BC. The ways that tools are made by blacksmiths have changed very little since then.

Around 1850, countries like the United States of America and the United Kingdom made new ways to make steel and tools in factories. Factories now make tools faster, and for less money than blacksmiths. There are now very few blacksmiths in countries that have a lot of factories.

The few blacksmiths that are still in countries with a lot of factories, make iron that is art. These blacksmiths make gates, stair rails, and chairs and tables for outdoors. People buy this iron as art, because each piece is different from the other pieces.

Iron must be very hot to shape with a hammer. Hot iron becomes cold very soon. A blacksmith has only a few seconds to hammer a piece of iron, before it must be put back in the fire to become hot again.

A forge burns coal or charcoal in a special fire, which can produce a high temperature. A bellows pushes air into the forge, to make the fire burn hotter. The blacksmith puts pieces of iron in the fire to make them hot. 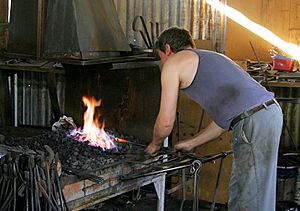 A blacksmith at work

There are a few ways to change a piece of iron's shape with hammer and heat. Here are the most important ways that a blacksmith uses:

A punch is a tool like a short stick of iron. The end of the punch is flat.

A chisel is a tool like a short stick of iron. The end of the chisel is sharp to cut. 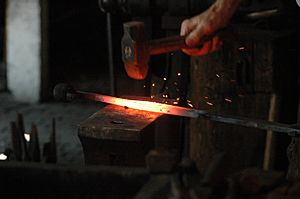 Hot metal work from a blacksmith

Iron is one of the 92 natural elements.

To anneal iron or steel, a blacksmith heats the metal until it no longer pulls a magnet, and then makes the metal become cold very slowly. Blacksmiths can cover the hot metal with sand, so that it takes hours to become cold. This makes iron or steel very soft.

Steel acts just like iron, until a blacksmith "heat-treats" the steel. This is a special way to make the steel hot and then cold, so that the steel will become hard enough to keep a cutting edge (blade). A blade made from a piece of iron (instead of steel) will very soon become dull and will not cut. Good blades (for knives, chisels, axes, and other tools with cutting edges) are always made of steel, then heat-treated, and then sharpened.

To heat-treat steel, a blacksmith heats the steel until it no longer pulls a magnet, then makes the steel become cold very quickly. A blacksmith does this by putting the hot steel into a bucket of water and moving it around until it is cold. This is called "quenching". When this is finished, the steel will be as hard as it can be. It will be so hard, that if someone hits it or drops it, it can break like glass.

The next step is to "draw the temper" or "temper" the steel, so that it will not break like glass. To temper steel, a blacksmith polishes a part of the steel so that it is smooth and shiny. The blacksmith then slowly heats the steel in the fire. When the steel is between 300 and 650 °F (149 and 343 °C), the polished steel will turn different colors. These colors do not glow in the dark; they look like dye on the polished steel. As the steel gets hotter from 300 to 650 degrees F, it will turn through the colors: yellow, then brown, then purple, then blue. Yellow means the steel will still be harder, blue means the steel will be softer (but still hard). When the steel turns the color that the blacksmith wants, he puts the steel into a bucket of water to stop the change. Different tools are tempered to different colors, but it also depends on how much carbon there is in the steel. Usually, stone chisels are tempered to yellow, and axes for trees are tempered to blue, but the blacksmith has to decide.

A blacksmith does not hammer a blade edge thin. A blacksmith hammers the steel so that the edge stays thick. After the "heat-treat" and "temper", stones are used to grind the blade edge to make it sharp.

If a blacksmith has a piece of iron or steel, but does not know which one it is, the blacksmith can heat-treat it like steel. If it does not become hard, then it is not steel. Iron will show the same temper colors as steel, but it will not be hard.

A blacksmith must be careful when hammering hardened steel or work-hardened iron, because small pieces can break off and fly, and these can hurt his or her eyes. Many blacksmiths wear plastic safety glasses to keep their eyes safe.

Tools and objects made by blacksmiths 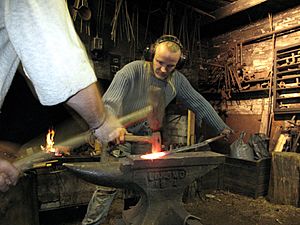 An artist blacksmith and a striker working as one.

All content from Kiddle encyclopedia articles (including the article images and facts) can be freely used under Attribution-ShareAlike license, unless stated otherwise. Cite this article:
Blacksmith Facts for Kids. Kiddle Encyclopedia.