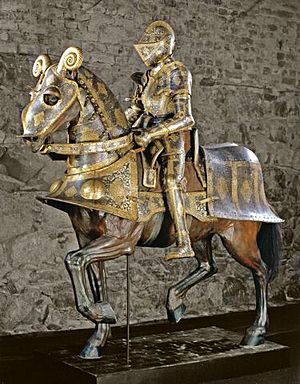 Plate armour is a type of body armour made from iron or steel plates. The iconic suit of armour that entirely covers the wearer is plate armour. The earliest example of plate armour is the Roman army's Lorica segmentata. However full plate armour was mainly made in Europe in the late middle ages. This was an improvement on the coat of plates that had been worn over chain mail in the 13th century. It reached its peak popularity in the 15th and 16th centuries. It is often associated with medieval knights, since modified plate armour was used in jousting. However after 1650 only the breastplate was generally worn. This is because the musket was created: the musket could pierce plate armour over long distances.

All content from Kiddle encyclopedia articles (including the article images and facts) can be freely used under Attribution-ShareAlike license, unless stated otherwise. Cite this article:
Plate armour Facts for Kids. Kiddle Encyclopedia.