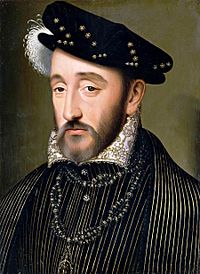 Henry was born in Saint-Germain-en-Laye, France, on March 31, 1519. His parents were Francis I of France and Claude of France.

Henry was married to Catherine of Medici on October 28, 1533 when he was only 14 years old. Their children were:

Henry did not love Catherine of Medici. He spent most of his time with his mistress, who was called Diane de Poitiers.

Henry died on July 10, 1559 after a jousting accident. He is buried in the Saint Denis Basilica. The next King was Francis II of France.

All content from Kiddle encyclopedia articles (including the article images and facts) can be freely used under Attribution-ShareAlike license, unless stated otherwise. Cite this article:
Henry II of France Facts for Kids. Kiddle Encyclopedia.