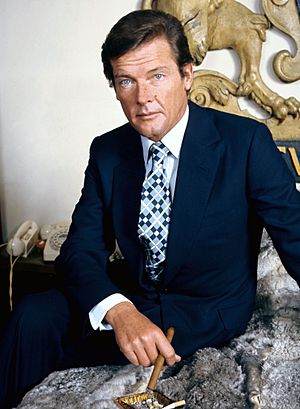 Sir Roger George Moore, KBE (14 October 1927 – 23 May 2017) was an English actor and a UNICEF ambassador. He is probably the most well known for playing fictional spy James Bond in seven movies from 1973 to 1985. He played James Bond more times than any other actor. He was also well known for playing Simon Templar in the television show The Saint. He began his career by becoming a male model.

Moore was the only child of policeman, George Moore, and housewife, Lilian "Lily". He attended Battersea Grammar School, but was evacuated to Holsworthy, Devon, during the Second World War. He was then educated at Dr Challoner's Grammar School in Amersham, Buckinghamshire. He then attended the College of the Venerable Bede at the University of Durham, but never graduated. Moore served in the Royal Army Service Corps, commanding a small depot in West Germany.

Moore left his first wife, skater Doorn Van Steyn, for singer Dorothy Squires. Squires was 12 years older than him. She was also, at that time, much more famous than he was. They lived together for a short time in Dafen, Llanelli, South Wales. While making a movie in Italy in 1961, Moore left Squires for Italian actress Luisa Mattioli. Moore has a daughter and two sons with Mattioli. Moore ended this marriage in 1993. His current marriage is to the Danish-Swedish multi-millionaire Kristina 'Kiki' Tholstrup.

When Moore married Kiki Tholstrup, he began spending winters in Crans-Montana, Valais (Switzerland) and summers at his apartment in Monaco.

On 11 October 2007, three days before he turned 80, Moore was awarded a star on the Hollywood Walk of Fame. Moore's Star was the 2,350th star. It is appropriately located at 7007 Hollywood Boulevard.

In 2008, the French Government appointed Moore a Commander of the Ordre des Arts et des Lettres.

His autobiography My Word is My Bond was published the same year. 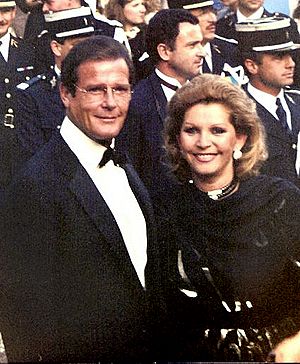 All content from Kiddle encyclopedia articles (including the article images and facts) can be freely used under Attribution-ShareAlike license, unless stated otherwise. Cite this article:
Roger Moore Facts for Kids. Kiddle Encyclopedia.