George Robert Lazenby ( born 5 September 1939) is an Australian actor and former model. He is best known for having played Ian Fleming's fictional British secret agent James Bond in the film On Her Majesty's Secret Service (1969). At age 29, he was the youngest actor to have portrayed Bond. Lazenby is also the only Bond actor to receive a nomination for the Golden Globe Award for New Star of the Year – Actor.

Prior to his portrayal as Bond, Lazenby was a model and appeared in advertising. After declining to do another Bond film, Lazenby continued to act in Italy, Hong Kong, Australia, and Hollywood. His career stalled in the 1970s and he moved into business and invested in real estate. He later appeared in several films and television series, including roles which parody the James Bond character. In 2017, a Hulu docudrama film, Becoming Bond, featured Lazenby recounting his life story and portrayal as Bond. 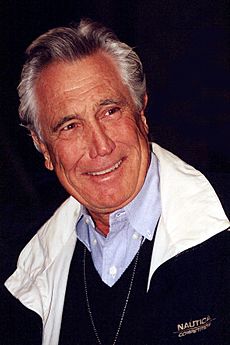 Lazenby attending the tennis match of his future wife, Pam Shriver, in 2001

In 1973, Lazenby married his girlfriend of three years, Chrissie Townsend, a member of the Gannett family. They subsequently had two children, Zachary and Melanie.

In 2002 Lazenby married former tennis player Pam Shriver. In August 2008, it was reported that Shriver had filed for divorce from Lazenby. The couple have three children, including twins born in 2005.

All content from Kiddle encyclopedia articles (including the article images and facts) can be freely used under Attribution-ShareAlike license, unless stated otherwise. Cite this article:
George Lazenby Facts for Kids. Kiddle Encyclopedia.