Finchley is an area of north London, England, in the London Borough of Barnet. Finchley is on high ground, 11 km (6.8 mi) north of Charing Cross. It formed an ancient parish in the county of Middlesex, becoming a municipal borough in 1933, and has been part of Greater London since 1965.

Finchley probably means "Finch's clearing" or "finches' clearing" in late Anglo-Saxon; the name was first recorded in the early 13th century. Finchley is not recorded in Domesday Book, but by the 11th century its lands were held by the Bishop of London. In the early medieval period the area was sparsely populated woodland, whose inhabitants supplied pigs and fuel to London.

Extensive cultivation began about the time of the Norman Conquest. By the 15th and 16th centuries the woods on the eastern side of the parish had been cleared to form Finchley Common. The medieval Great North Road, which ran through the common, was notorious for highwaymen until the early 19th century. 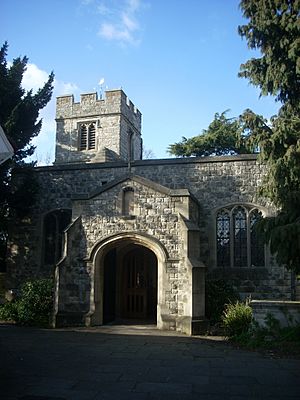 St Mary-at-Finchley Church is first recorded in the 1270s. Near the northern gate to the Bishop of London's park, the hamlet of East End, later East Finchley, had begun to develop by 1365.

The Edgware, Highgate and London Railway (later the Great Northern Railway) reached Finchley in 1867. It ran from Finsbury Park via Finchley to Edgware. The branch from Finchley to High Barnet opened in 1872. In 1905 tram services were established in Finchley, and extended shortly afterwards to Barnet. They were eventually replaced by trolleybuses.

In 1933, the Underground New Works Programme, 1935-1940 to electrify the lines through Finchley, and connect the Northern line from Archway to East Finchley, via a new tunnel was announced. Much of the work was carried out and East Finchley station was rebuilt, but the project was halted by the second world war. All passenger services from Finchley to Edgware ended in September 1939. Nevertheless, Underground trains began running from central London to High Barnet in 1940, and to Mill Hill East, to reach the army barracks, in 1941.

After the war, the introduction of London's Metropolitan Green Belt undermined pre-war plans and the upgrading between Mill Hill East and Edgware (the 'Northern Heights' project) was abandoned, although the line continued to be used by steam trains for goods traffic through Finchley, until 1964. 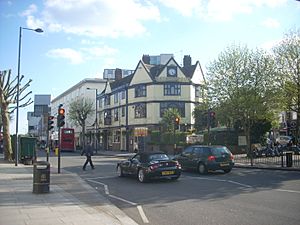 Finchley is on a plateau, 90 metres (300 ft) above sea level 11 km (6.8 mi) north of Charing Cross and 6 km (3.7 mi) south of Barnet. To the west is the Dollis valley formed by Dollis Brook the natural western boundary of Finchley. Mutton Brook forms the southern boundary, joining the Dollis Brook to become the River Brent.

Most of Finchley is on boulder clay or glacial moraine, skirted by a layer of gravel, then the underlying layer of London clay. This roughly triangular gravel line was the most fertile area; hamlets which grew at the three corners evolved into Finchley's early population centres corresponding to the three town centres in the area:

The area of London known as 'Finchley Road', around Finchley Road tube station, is not part of Finchley, but instead refers to a district further south at Swiss Cottage, Camden. The area is named after a section of the A41 road, which runs north to Golders Green and eventually continues to Henlys Corner on the North Circular Road and on to Finchley.

St Mary's at Finchley is the parish church, with parts dating from the 13th century.

College Farm is the last farm in Finchley; it was a model dairy farm, then a visitor attraction. The Phoenix Cinema in East Finchley with its 1930s art deco façade is one of the oldest purpose-built cinemas in the United Kingdom.

The Sternberg Centre for Judaism in the old Manor House (formerly convent and school of St Mary Auxiliatrice) at 80 East End Road in Finchley is a Jewish cultural centre. It was founded to facilitate Reform and Liberal Jewish institutions, attached to the Movement for Reform Judaism.

The Archer, on East Finchley tube station, is a 10-foot-tall (3.0 m) statue by Eric Aumonier of a kneeling archer having just released an arrow. The statue La Délivrance depicts a woman holding a sword; it stands at the approach to Finchley from the south, in a small garden beside Regent's Park Road, just north of Henlys Corner. 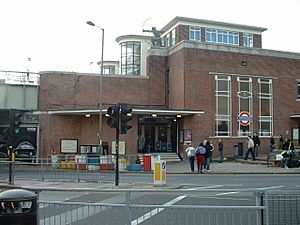 Transport for London is responsible for transport in Finchley. Finchley has four London Underground stations, all on the High Barnet branch of the Northern line, which serves the West End and City (financial district).

Two of London's major roads, the east-west A406 North Circular Road and the north-south A1 meet and briefly merge at Henlys Corner at the southern edge of Finchley.

The artsdepot, a community arts centre including a gallery, studio and theatre, opened in 2004, at Tally Ho Corner, North Finchley.

Victoria Park is off Ballards Lane between North Finchley and Finchley Central. It was proposed in 1887 to mark Queen Victoria’s golden jubilee and opened in 1902 to be Finchley's first public park. There is also a small nature reserve adjacent to the North Circular, Long Lane Pasture.

Avenue House in East End Road was built in 1859. In 1874 it was acquired by Henry Charles Stephens, known as "Inky" Stephens, the son of the inventor of indelible blue-black ink Dr Henry Stephens. On his death in 1918 he bequeathed the house and its grounds to "the people of Finchley". The estate is now known as Stephens House and Gardens. It has a small museum, the Stephens Collection, which covers the history of the Stephens Ink Company and the history of writing materials. The bequest also included Avenue House Grounds, designed by the leading nineteenth-century landscape gardener Robert Marnock. This has a tearoom, a children's playground, a walled garden called The Bothy, a pond and rare trees.

All content from Kiddle encyclopedia articles (including the article images and facts) can be freely used under Attribution-ShareAlike license, unless stated otherwise. Cite this article:
Finchley Facts for Kids. Kiddle Encyclopedia.