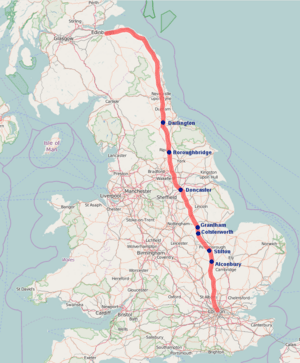 Line of the Great North Road from London to Edinburgh

The Great North Road was the main highway between England and Scotland from medieval times until the 20th century. It became a coaching route used by mail coaches travelling between London, York and Edinburgh. The modern A1 mainly parallels the route of the Great North Road. Coaching inns, many of which survive, were staging posts providing accommodation, stabling for horses and replacement mounts. Nowadays virtually no surviving coaching inns can be seen while driving on the A1, because the modern route bypasses the towns in which the inns are found. 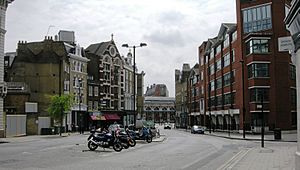 Southern end of St John Street, with Smithfield Market visible in the distance. The island in the middle of the road marks the former site of Hicks Hall.

The traditional starting point of the Great North Road was Smithfield Market in Clerkenwell, London. Hicks Hall, the first purpose-built sessions-house for the Middlesex justices of the peace, was built in 1611 immediately north of the market, on an island site in the middle of St John Street (where St John's Lane branches to the west); and this building was used as the initial datum point for mileages on the Great North Road. Its site continued to be used for this purpose even after the building was demolished soon after 1778. The route followed St John Street to the junction of City Road and Pentonville Road (near Upper Street) in the north, at the Angel Inn. The Red Bull Theatre was on the street between 1604 and 1666, when it was destroyed in the Great Fire of London. James Burnett, Lord Monboddo (1714–1799) lived at 13 St John Street. He held "learned suppers" at his house, with guests including James Boswell, Robert Burns and Samuel Johnson.

When the General Post Office at St Martin's-le-Grand was built in 1829, coaches started using an alternative route, now the modern A1 road, beginning at the Post Office and following Aldersgate Street and Goswell Road before joining the old route close to the Angel. The Angel Inn itself was an important staging post. The next important stages were at Highgate, Barnet, Hatfield, Baldock, Biggleswade and Alconbury, all replete with traditional coaching inns. 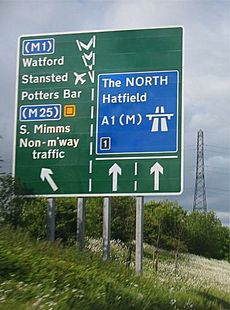 The A1 at South Mimms, Hertfordshire, approaching Junction 1 with the M25 and A1(M)

At Colsterworth the Great North Road diverges west of the Roman road and continues through Grantham, Newark, Retford and Bawtry to Doncaster. North of Doncaster the Great North Road again follows a short section of Ermine Street, the Roman Rigg or Roman Ridge. Further north the Great North Road crossed the Roman Dere Street near Boroughbridge from where it continued via Dishforth and Topcliffe to Northallerton and then through Darlington, Durham and Newcastle, on to Edinburgh. A road forked to the left at the bridge in Boroughbridge to follow Dere Street, and Scotch Corner to Penrith and on to Glasgow. Part of this route was the original A1, with a local road from Scotch Corner via Barton to Darlington making the link back to the old Great North Road.

In the first era of stage coaches York was the terminus of the Great North Road. Along the route Doncaster–Selby–York was superseded by the route Doncaster–Ferrybridge–Wetherby–Boroughbridge–Northallerton–Darlington, the more direct way to Edinburgh, the final destination. The first recorded stage coach operating from London to York was in 1658 taking four days. Faster mail coaches began using the route in 1786, stimulating a quicker service from the other passenger coaches. In the "Golden Age of Coaching", between 1815 and 1835, coaches could travel from London to York in 20 hours, and from London to Edinburgh in 451⁄2 hours. In the mid-nineteenth century coach services could not compete with the new railways. The last coach from London to Newcastle left in 1842 and the last from Newcastle to Edinburgh in July 1847.

All content from Kiddle encyclopedia articles (including the article images and facts) can be freely used under Attribution-ShareAlike license, unless stated otherwise. Cite this article:
Great North Road (Great Britain) Facts for Kids. Kiddle Encyclopedia.