Stamford is a town on the River Welland in Lincolnshire, England, 92 miles (148 km) north of London on the A1. The population at the 2001 census was 21,800 including the adjacent parish of St Martin's Without.

The town has 17th and 18th-century stone buildings, older timber-framed buildings and five medieval parish churches. In 2013, Stamford was rated the best place to live by the Sunday Times. 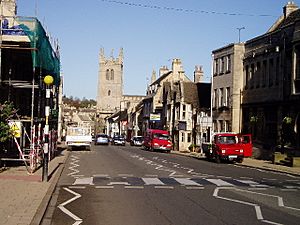 The Romans built Ermine Street across what is now Burghley Park and forded the river Welland to the west of Stamford, eventually reaching Lincoln; they built a town to the north at Great Casterton on the River Gwash. In AD 61 Boudica followed the Roman 9th Legion (Legio IX Hispana) across the river. The Anglo-Saxons later chose Stamford as their main town, being on a more important river than the Gwash.

In 972 King Edgar made Stamford a borough. The Anglo-Saxons and Danes faced each other across the river. The town originally grew as a Danish settlement at the lowest point that the Welland could be crossed by ford or bridge. Stamford was the only one of the Danelaw Five Burghs ("boroughs") not to become a county town. Initially a pottery centre, producing Stamford Ware, by the Middle Ages it had become famous for its production of wool and the woollen cloth known as Stamford cloth or haberget - which "In Henry III's reign ... was well known in Venice".

Stamford was a walled town but only a very small portion of the walls now remain. Stamford became an inland port on the Great North Road, the latter superseding Ermine Street in importance. Notable buildings in the town include the mediaeval Browne's Hospital, several churches and the buildings of Stamford School, a public school founded in 1532. 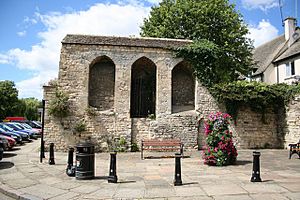 A fragment of Stamford Castle

A Norman castle was built about 1075 and apparently demolished in 1484. The site stood derelict until the late twentieth century when it was built over and now includes a bus station and a modern housing development. A small part of the curtain wall survives at the junction of Castle Dyke and Bath Row.

Stamford has been hosting an annual fair since the Middle Ages. Stamford fair is mentioned in Shakespeare's Henry IV part 2 (act 3 scene 2). The mid-Lent fair is the largest street fair in Lincolnshire and one of the largest in the country. On 7 March 1190, crusaders at the fair led a pogrom; many Jews in the town were massacred. 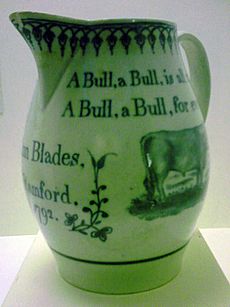 A jug commemorates Ann Blades - a Stamford bull runner in 1792

For over 600 years Stamford was the site of the Stamford Bull Run festival, held annually on 13 November, St Brice's day, until 1839. According to local tradition, the custom was started by William de Warenne, 5th Earl of Surrey, after he saw two bulls fighting in the meadow beneath his castle viewpoint. Some butchers came to part the combatants and one of the bulls ran into the town. The earl mounted his horse and rode after the animal; he enjoyed the sport so much that he gave the meadow in which the fight began to the butchers of Stamford on condition that they should provide a bull, to be run in the town every 13 November, for ever after.

Stamford Museum was in a Victorian building in Broad Street from 1980 to 2011. In June 2011 it closed because of Lincolnshire County Council budget cuts. Some of the former exhibits have been relocated to the Discover Stamford area at the town's library.

Stamford is a town and civil parish in the South Kesteven district of Lincolnshire, on the River Welland in a southwesterly protrusion of Lincolnshire, between Rutland to the north and west, and Peterborough to the south. It borders Northamptonshire to the southwest. There have been mistaken claims of a quadripoint where four ceremonial counties, Rutland, Lincolnshire, Cambridgeshire and Northamptonshire seem to meet at a point (52°38′25″N 0°29′40″W﻿ / ﻿52.64028°N 0.49444°W﻿ / 52.64028; -0.49444). However, the location actually consists of two tripoints around 66 ft (20 metres) apart.

In 1991, the boundary between Lincolnshire and Rutland (then Leicestershire) in the Stamford area was rearranged and now mostly follows the A1 to the railway line. The conjoined parish of Wothorpe is in the city of Peterborough. Barnack Road is the Lincolnshire/Peterborough boundary where it borders St Martin's Without.

The river downstream of the town bridge, and some of the meadows, fall within the drainage area of the Welland and Deepings Internal Drainage Board.

In 1968, a specimen of the sauropod dinosaur Cetiosaurus oxoniensis was found in the Williamson Cliffe Quarry, close to nearby Great Casterton in adjacent Rutland. It is about 170 million years old, from the Aalenian or Bajocian part of the Jurassic period. It is 15 metres (49 ft) long and one of the most complete dinosaur skeletons found in the UK. In 1975, it was installed in the New Walk Museum in Leicester. 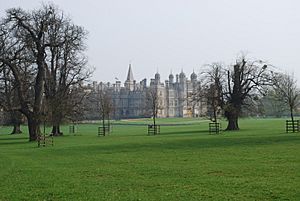 Stamford was the first conservation area to be designated in England and Wales under the Civic Amenities Act 1967. Since then the whole of the old town and St Martin's has been made an outstanding area of architectural or historic interest that is of national importance. The town has over 600 listed buildings, more than half of the total for the County of Lincolnshire.

The Industrial Revolution largely left Stamford untouched. Much of the town centre was built in the seventeenth and eighteenth centuries, in Jacobean or Georgian style. Stamford is characterised by streets of timber-framed and stone buildings (using the local limestone that Lincoln Cathedral is built from), and little shops tucked down back alleys. A significant number of the old coaching inns survive, their large doorways being a feature of the town. The main shopping area was pedestrianised in the 1980s.

Near Stamford (actually in the historic Soke of Peterborough) is Burghley House, an Elizabethan mansion, vast and ornate, built by the First Minister of Elizabeth I, Sir William Cecil, later Lord Burghley. The house is the ancestral seat of the Marquess of Exeter. The tomb of William Cecil is in St Martin's Church in Stamford. The parkland of the Burghley Estate adjoins the town of Stamford on two sides. Also inside the district of Peterborough is the village of Wothorpe.

Another historic country house near Stamford is Tolethorpe Hall, now host to outdoor theatre productions by the Stamford Shakespeare Company.

Tobie Norris had a famous bell foundry in the town in the 17th century; his name is now better known as a popular pub on St Paul's Street. 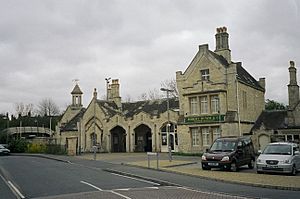 Lying as it does on the main north-south route (Ermine Street, the Great North Road and now the A1) from London to York and Edinburgh, several Parliaments were held in Stamford in the Middle Ages. The George, the Bull and Swan, the Crown and the London Inn were well-known coaching inns. The town had to manage with Britain's north-south traffic through its narrow roads until 1960, when the bypass was built to the west of the town, only a few months after the M1 opened. The old route is now the B1081. There is only one road bridge over the Welland (excluding the A1): a local bottleneck.

Until 1996, there were firm plans for the bypass to be upgraded to motorway standard, since shelved. The Carpenter's Lodge roundabout south of the town has been replaced with a grade-separated junction. The old A16 road, now A1175 (Uffington Road), which heads to Market Deeping, meets the north end of the A43 (Wothorpe Road) in the south of the town. 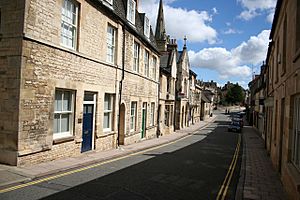 Foot bridges cross the Welland at the Meadows, some 500 yards upstream of the Town Bridge, and with the Albert Bridge a similar distance downstream.

The Jurassic Way runs from Banbury to Stamford. The Hereward Way runs through the town from Rutland to the Peddars Way in Norfolk, along the Roman Ermine Street and then the River Nene. The Macmillan Way heads through the town, finishing at Boston and there is also Torpel Way to Peterborough, which follows the railway line, entering Peterborough at Bretton.

Closure of Stamford East railway station in 1957 saw services to Essendine handled at the town station, until the Stamford & Essendine line closed in 1959. The surviving railway station, hidden away between Wothorpe Road and the Welland, has direct services to Leicester, Birmingham and Stansted Airport (via Cambridge) on the Birmingham to Peterborough Line. Trains arriving from, or departing for Peterborough, pass through a short tunnel that runs beneath St Martins.

The town has a bus station on part of the old Castle site in St Peter's Hill. The main bus routes are two routes to Peterborough, via Helpston or via Wansford, and to Oakham, Grantham, Uppingham and Bourne. There are also less frequent services to Peterborough by other routes. Delaine services terminate at their old depot in North Street. Other operators active include CentreBus, Blands and Peterborough Council.

On Sundays and Bank Holidays from 16 May 2010, there are five journeys to Peterborough operated by Peterborough City Council, on routes via Wittering/Wansford, Duddington/Wansford, Burghley House/Barnack/Helpston and Uffington/Barnack/Helpston. There is also a National Express coach service between London and Nottingham each day including Sundays. Route maps and timetables are on Lincolnshire County Council's website, as responsibility for overseeing transport lies with that level of government. 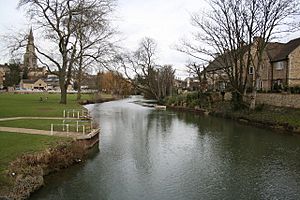 Although commercial shipping traffic brought cargoes along a canal from Market Deeping to warehouses in Wharf Road until the 1850s, this traffic is no longer possible because of the abandonment of the canal and the shallowness of the river above Crowland. There is a lock at the Sluice in Deeping St James but it is not in use. The river was not conventionally navigable upstream of the Town Bridge. 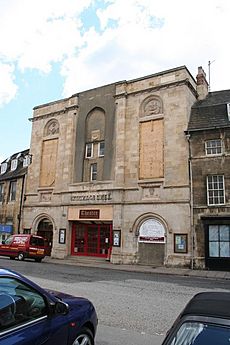 Stamford and nearby villages have their own substantial entertainment sector, as well as being able to access what is on offer in Peterborough, Leicester and other nearby cities. The local sector includes: 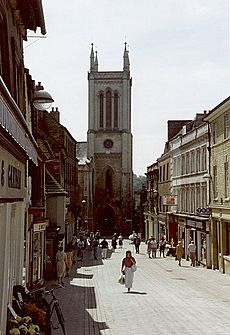 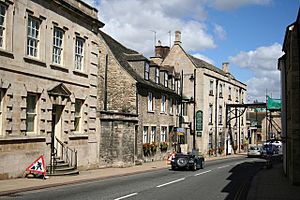 All content from Kiddle encyclopedia articles (including the article images and facts) can be freely used under Attribution-ShareAlike license, unless stated otherwise. Cite this article:
Stamford, Lincolnshire Facts for Kids. Kiddle Encyclopedia.