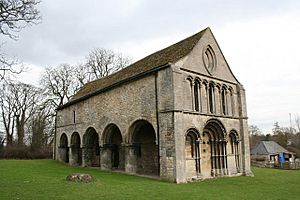 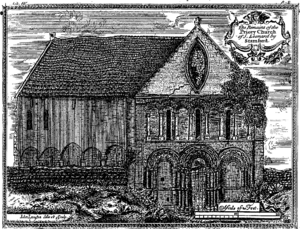 St Leonard's Priory, Stamford was a priory in Lincolnshire, England. It was built in Stamford, supposedly on the site of a monastery which was founded by St Wilfrid in 658 and destroyed in the Danish invasion.

It was jointly refounded by William the Conqueror and William de St-Calais, the Bishop of Durham, in c1082 and remained a cell of Durham until its dissolution in 1538.

Part of the fine transitional west front and north arcade of the church survive. The ruins and site of St Leonard's Priory is a Scheduled Monument and the structure is a Grade I listed building.

All content from Kiddle encyclopedia articles (including the article images and facts) can be freely used under Attribution-ShareAlike license, unless stated otherwise. Cite this article:
St Leonard's Priory, Stamford Facts for Kids. Kiddle Encyclopedia.