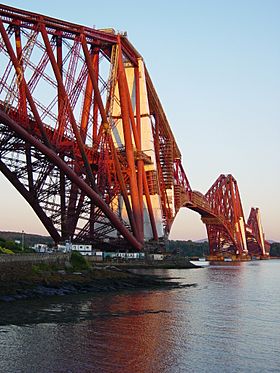 The Forth Bridge, designed by Sir Benjamin Baker and Sir John Fowler, opened in 1890, and now owned by Network Rail, is designated as a Category A listed building by Historic Scotland.

A listed building, in the United Kingdom, is a building that has been placed on the Statutory List of Buildings of Special Architectural or Historic Interest. This is a list of buildings that are important in terms of architecture, history, or culture. There are many buildings on this list. In the UK, there are about 500,000 listed buildings.

In England and Wales, there are three kinds of listed buildings:

There used to be a fourth kind of listed building: Grade III. This type has not been used since 1970.

All content from Kiddle encyclopedia articles (including the article images and facts) can be freely used under Attribution-ShareAlike license, unless stated otherwise. Cite this article:
Listed building Facts for Kids. Kiddle Encyclopedia.