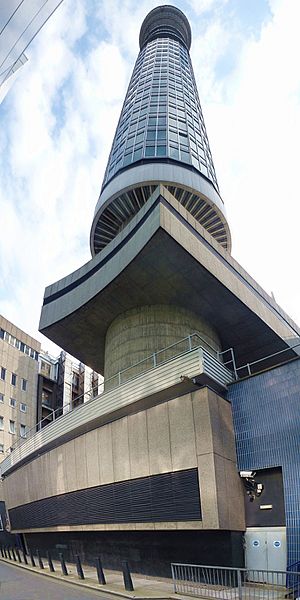 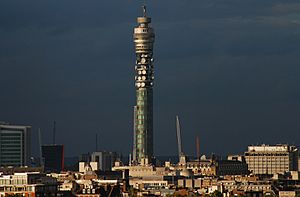 The BT Tower is a communications tower located in Fitzrovia, London, owned by BT Group. It has been previously known as the GPO Tower, the Post Office Tower and, most commonly, the British Telecom Tower. The main structure is 177 metres (581 ft) high, with a further section of aerial rigging bringing the total height to 189 metres (620 ft). Its Post Office code was YTOW.

Upon completion in 1964, it overtook the Millbank Tower to become the tallest building in both London and the United Kingdom, titles that it held until 1980, when it in turn was overtaken by the NatWest Tower.

It replaced a much shorter steel lattice tower which had been built on the roof of the neighbouring Museum telephone exchange in the late 1940s to provide a television link between London and Birmingham. The taller structure was required to protect the radio links' "line of sight" against some of the tall buildings in London then in the planning stage. These links were routed via other GPO microwave stations at Harrow Weald, Bagshot, Kelvedon Hatch and Fairseat, and to places like the London Air Traffic Control Centre at West Drayton.

The tower was designed by the architects of the Ministry of Public Building and Works: the chief architects were Eric Bedford and G. R. Yeats. Typical for its time, the building is concrete clad in glass. The narrow cylindrical shape was chosen because of the requirements of the communications aerials: the building will shift no more than 25 centimetres (10 in) in wind speeds of up to 150 km/h (95 mph). Initially, the first 16 floors were for technical equipment and power. Above that was a 35-metre section for the microwave aerials, and above that were six floors of suites, kitchens, technical equipment, a revolving restaurant, and finally a cantilevered steel lattice tower. To prevent heat build-up, the glass cladding was of a special tint. The construction cost was £2.5 million.

Construction began in June 1961; owing to the building's height and its having a tower crane jib across the top virtually throughout the whole construction period, it gradually became a very prominent landmark that could be seen from almost anywhere in London. A question was raised in Parliament about the crane, in August 1963. Reginald Bennett MP asked the Minister of Public Buildings and Works, Geoffrey Rippon, how, when the crane on the top of the new Tower had fulfilled its purpose, he proposed to remove it. Rippon replied: "This is a matter for the contractors. The problem does not have to be solved for about a year but there appears to be no danger of the crane having to be left in situ."

The tower was topped out on 15 July 1964, and officially opened by the then Prime Minister Harold Wilson on 8 October 1965. The main contractor was Peter Lind & Co Ltd.

The tower was originally designed to be just 111 metres (364 ft) high; its foundations are sunk down through 53 metres (174 ft) of London clay, and are formed of a concrete raft 27 metres (89 ft) square, 1 metre (3 ft) thick, reinforced with six layers of cables, on top of which sits a reinforced concrete pyramid.

The tower was officially opened to the public on 19 May 1966, by Tony Benn (then known as Anthony Wedgwood Benn) and Billy Butlin, with HM the Queen visiting on 17 May 1966.

As well as the communications equipment and office space, there were viewing galleries, a souvenir shop and a rotating restaurant on the 34th floor; this was called The Top of the Tower, and operated by Butlins. It made one revolution every 23 minutes.

In its first year the Tower hosted just under one million visitors and over 100,000 diners ate in the restaurant.

A bomb, responsibility for which was at first claimed by the Kilburn Battalion of the IRA, exploded in the roof of the men's toilets at the Top of the Tower restaurant at 04:30 on 31 October 1971. Responsibility for the bomb was also claimed by members of the Angry Brigade, a far-left anarchist collective. That act resulted in the tower being largely closed to the general public.

The restaurant was closed to the public for security reasons a matter of months after the bombing in 1971. 1980 was the year in which Butlins' lease expired. Public access to the building ceased in 1981.

The tower is sometimes used for corporate events, such as a children's Christmas party in December, Children in Need, and other special events; even though it is closed, the tower retains its revolving floor, providing a full panorama over London and the surrounding area.

Races up the tower

The first documented race up the tower's stairs was on 18 April 1968, between University College London and Edinburgh University; it was won by an Edinburgh runner in 4 minutes, 46 seconds.

In 1969, eight university teams competed, with John Pearson from Manchester University winning in a time of 5 minutes, 6 seconds. 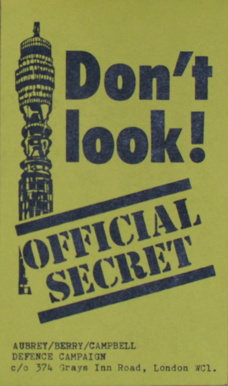 Due to its importance to the national communications network, information about the tower was designated an official secret. In 1978, the journalist Duncan Campbell was tried for collecting information about secret locations, and during the trial the judge ordered that the sites could not be identified by name; the Post Office Tower could only be referred to as 'Location 23'.

In February 1993, the MP Kate Hoey used the tower as an example of trivial information being kept officially secret, and joked that she hoped parliamentary privilege allowed her to confirm that the tower existed and to state its street address.

The tower is still in use, and is the site of a major UK communications hub. Microwave links have been replaced by subterranean optical fibre links for most mainstream purposes, but the former are still in use at the tower. The second floor of the base of the tower contains the TV Network Switching Centre which carries broadcasting traffic and relays signals between television broadcasters, production companies, advertisers, international satellite services and uplink companies. The outside broadcast control is located above the former revolving restaurant, with the kitchens on floor 35.

Panoramic view from BT Tower in the evening.

A renovation in the early 2000s introduced a 360° coloured lighting display at the top of the tower. Seven colours were programmed to vary constantly at night and intended to appear as a rotating globe to reflect BT's "connected world" corporate styling. The coloured lights give the tower a conspicuous presence on the London skyline at night. In October 2009, a 360° full-colour LED-based display system was installed at the top of the tower, to replace the previous colour projection system. The new display, referred to by BT as the "Information Band", is wrapped around the 36th and 37th floors of the tower, 167 m (548 ft) up, and comprises 529,750 LEDs arranged in 177 vertical strips, spaced around the tower. The display is the largest of its type in the world, occupying an area of 280 m2 (3,000 sq ft) and with a circumference of 59 m (194 ft). The display is switched off at 10.30pm each day. On 31 October 2009, the screen began displaying a countdown of the number of days until the start of the London Olympics in 2012. In April 2019, the display spent almost a day displaying a Windows 7 error message.

In October 2009, The Times reported that the rotating restaurant would be reopened in time for the 2012 London Olympics. However, in December 2010, it was further announced that the plans to reopen had now been "quietly dropped" with no explanation as to the decision. For the tower's 50th anniversary, the 34th floor was opened for three days from 3 to 5 October 2015 to 2,400 winners of a lottery.

The BT Tower was given Grade II listed building status in 2003. Several of the defunct antennae attached to the building could not be removed unless the appropriate listed building consent was granted, as they were protected by this listing. In 2011, permission for the removal of the defunct antennas was approved on safety grounds as they were in a bad state of repair and the fixings were no longer secure. In December 2011, the last of the antennas was removed leaving the core of the tower visible.

Entry to the building is by two high-speed lifts which travel at a top speed of 1400 feet per minute (7 metres per second (15.7 mph)), reaching the top of the building in under 30 seconds. An Act of Parliament was passed to vary fire regulations, allowing the building to be evacuated by using the lifts – unlike other buildings of the time.

In 2006, the tower began to be used for short-term air quality observations by the UK Centre for Ecology & Hydrology and this has continued in a more permanent form as BT Tower Observatory, an urban atmospheric pollution observatory to help monitor air quality in the capital. The aim is to measure pollutant levels above ground level to determine their source. One area of investigation is the long-range transport of fine particles from outside the city. 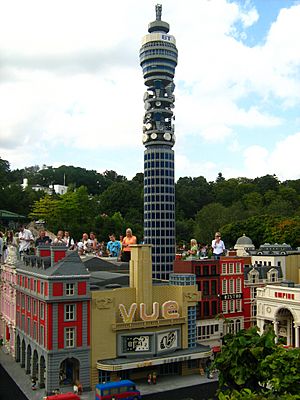 All content from Kiddle encyclopedia articles (including the article images and facts) can be freely used under Attribution-ShareAlike license, unless stated otherwise. Cite this article:
BT Tower Facts for Kids. Kiddle Encyclopedia.