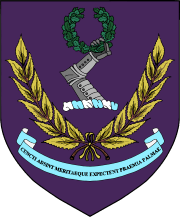 University College London (UCL) is a large university in London. It is the largest college of the federal University of London. As well as undergraduate teaching, it is one of the largest research universities in the country.

UCL was founded in 1826 as 'University College'. It was the first university institution to be founded in London and the first in England to be established on an entirely secular (non-religious) basis. It admits students regardless of their religious beliefs. UCL was also the first admit women on equal terms with men. University College became one of the two founding colleges of the University of London in 1836.

The original University College was based largely on ideas of Jeremy Bentham (1748–1832), a lawyer, social philosopher and free-thinker. Bentham believed in libertarianism, utilitarianism, women's suffrage, and the separation of church and state. These are beliefs of liberalism. The college was unique in that it was secular, and was called "that Godless institution in Gower Street".

University College was founded on 11 February 1826, under the name London University, as a secular alternative to the strictly Anglican universities of Oxford and Cambridge. It was founded from the beginning as a university, not a college or institute.

However, its founders got such strong opposition from the Church of England that it prevented them from getting the Royal Charter needed for the award of degrees. King's College London was specifically founded to provide an Anglican rival to UCL. It was not until 1836, when the latter-day University of London was established, that University College was legally recognised and granted the power to award degrees of the University of London.

UCL is a major centre for biomedical research; it is part of three of the 12 biomedical research centres established by the NHS in England and is a founding member of UCL Partners, the largest academic health science centre in Europe.

For the period 1999 to 2009 it was the 13th most-cited university in the world (and the most-cited in Europe). There has been at least one Nobel Prize winner from UCL every decade since the establishment of the Nobel Prizes in 1901. There are 29 Nobel Prize winners and three Fields Medalists amongst UCL’s alumni and current and former staff, the most recent being Sir Charles Kao, who received the Nobel Prize for Physics in 2009.

UCL is a member of the G5, the League of European Research Universities, the Russell Group, and other national and international groups. It forms part of the 'Golden Triangle' of British universities.

All content from Kiddle encyclopedia articles (including the article images and facts) can be freely used under Attribution-ShareAlike license, unless stated otherwise. Cite this article:
University College London Facts for Kids. Kiddle Encyclopedia.