Queen Elizabeth Olympic Park is a sporting complex and public park in Stratford and Hackney Wick, in east London. It was purpose-built for the 2012 Summer Olympics and Paralympics, situated adjacent to the Stratford City development. It contains the Olympic stadium, now known as the London Stadium, and the Olympic swimming pool together with the athletes' Olympic Village and several other Olympic sporting venues and the London Olympics Media Centre. The park is overlooked by the ArcelorMittal Orbit, an observation tower and Britain's largest piece of public art.

It was simply called The Olympic Park during the Games but was later renamed to commemorate the Diamond Jubilee of Queen Elizabeth II (though it is not an official Royal Park of London). The park occupies an area straddling four east London boroughs; Newham, Tower Hamlets, Hackney and Waltham Forest. Part of the park reopened in July 2013, while a large majority of the rest (including the Aquatics Centre, Velopark and Orbit observation tower) reopened in April 2014.

The site covers parts of Stratford, Bow, Leyton, and Hackney Wick in east London, overlooking the A12 road. The site was previously a mixture of greenfield and brownfield land, including parts of Hackney Marshes.

The Royal Mail gave the park and Stratford City the postcode E20, which had previously only appeared in the television soap opera EastEnders for the fictional suburb of Walford.

The park was designed by the EDAW Consortium (including EDAW, Allies and Morrison and Buro Happold), working with Arup and WS Atkins. Detailed landscape architecture was by LDA Design in conjunction with Hargreaves Associates. LDA design contracted Wallace Whittle to carry out various aspects of the M+E Building services design. The NHBC carried out the Sustainability assessments. The park was illuminated with a lighting scheme designed by Sutton Vane Associates.

London's Olympic and Paralympic bid proposed that there would be four indoor arenas in the park in addition to the main venues, but the revised master plan published in 2006 reduced this to three, with the volleyball events moved to the Earls Court Exhibition Centre. The fencing arena was also cancelled, with the fencing events taking place at ExCeL London. The remaining indoor arenas are the Basketball Arena and the Copper Box, in addition to the Water Polo Arena, the Aquatics Centre, and the Velopark. The final design of the park was approved by the Olympic Delivery Authority and its planning-decisions committee.

During its construction over 80,000 workers were engaged on the project. The construction of the Olympic Park was managed by CLM Delivery Partner, comprising CH2M Hill, Laing O'Rourke and Mace. CLM specifically managed the "white" space between the venue construction zones, including managing the internal road network. To enable the major phase of construction to begin, the 52 electricity pylons, up to 65 metres (213 feet) high, that dominated the landscape in and around the park were removed and the power transferred through new underground tunnels constructed by Murphy, known as the PLUG project – Powerlines Undergrounding. Following site clearance, the soil across the Park site was cleaned down to a human health layer, by soil washing.

Constituent sections of the park

In addition, at the time of the Olympic and Paralympic games:

Rowan Moore, writing in The Guardian when the QE Park opened, commented that: "There is a frenzy of wacky light fittings, of playground installations, of seats, tree species, sculptural lumps of granite, kiosks, railings and coloured surfaces...It suffers from an Olympic syndrome, where everyone wants to be a Mo or a Jessica and make their mark. No one, except perhaps the admirable Oudolf, wants to do the quiet stuff. Certainly not the student housing developers Unite, who have built an astoundingly ugly block of 1,001 units between the Athletes' Village and Westfield shopping centre that looms aggressively in almost every vista. Great care was taken to make the Athletes' Village aesthetically orderly, to the point where it began to resemble Ceausescu's Bucharest: this eruption makes such efforts futile."

Robert Holden and Tom Turner, in a review of the Olympic Park's landscape architecture state that 'Our fundamental point is that "the landscape planning is much better than the landscape design". The landscape planning includes the opening up of the River Lea in the northern section of the park, the habitat-creation strategy and the park's excellent links with its hinterland. The landscape design is dominated by vast pedestrian concourses which will be busy during events but will resemble unused airport runways on every other occasion. There is some good garden-type planting but it has not been used to make "gardens": it is used more like strips of planting beside highways'. 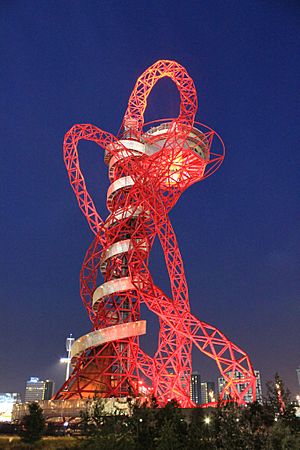 The ArcelorMittal Orbit at night

The park has a number of uses after the 2012 Summer Olympic Games in London finished, such as:

On 2 August 2011, it was announced the five neighbourhoods of housing and amenities (anti-clockwise from north-east) are:

These names have relevant history in the area. All four of the East London boroughs covering the park as such have a neighbourhood except for Waltham Forest.

The International Quarter is a new commercial district in Stratford, East London, which hosted the London 2012 Olympic and Paralympic Games. It will be a mixed-use development, with a total investment of in excess of £1.3 billion, and will be delivered by Lend Lease and London and Continental Railways in a 50/50 joint venture.

The International Quarter will include 4 million sq ft of commercial office space, 330 homes known as Glasshouse Gardens and a new hotel. The area is accessible via Stratford station.

Although the sporting venues in the park were reduced in scale after the conclusion of London 2012, part of the legacy is to ensure the continued use of those facilities that are permanent, as local and community resources and for major international sporting events that make use of the world class facilities constructed for the Olympics and Paralympics:

London has also bid for the right to hold both the UCI Track Cycling World Championships and the LEN European Aquatics Championships in 2016, which would be held at the Velodrome and Aquatics Centre respectively.

In addition to the use of the venues for international events, some of them are intended for use on a regular basis by amateur and professional sports teams in various sports.

On 11 February 2011, West Ham United were selected as preferred bidders, ahead of Tottenham Hotspur, to take over the Olympic Stadium as a football venue after the end of the games. However, five days later Leyton Orient chairman Barry Hearn announced that he would be challenging the decision to allow West Ham to relocate to the stadium, as he believed that having West Ham playing within one mile (1.6 kilometres) of their Brisbane Road stadium could cost Orient support and even their existence. Incidentally, Hearn had expressed interest some years earlier in moving Orient to Olympic Park and reducing its capacity to 25,000 seats, while West Ham would cut the capacity to 60,000 if their relocation went ahead. Tottenham Hotspur also pursued legal action over the decision and eventually the deal with West Ham collapsed due to legal pressure on 11 October 2011. West Ham did go on to win the later tenancy bid and will use the stadium from the start of the 2016–17 football season as the main tenant.

The Copper Box will be the only permanent indoor arena remaining after the end of London 2012. Built primarily for use in the handball and goalball competitions, it will be converted to a multi-use venue that will include use for basketball. As a result of the owners of the Prestige Homes Arena in Milton Keynes terminating their lease, the London Lions basketball club, after a season at the National Sports Centre, Selhurst, will relocate to the Copper Box (upon conversion).

The Lee Valley Hockey Centre was borne from a revamp of the Olympic Legacy Hockey Facility. The facility is the current ground of Wapping Hockey Club. The centre includes 2 state-of-the-art hockey pitches and is operated by the Lee Valley Regional Park Authority.

Following the demolition of the original warm-up track after the end of the Olympics, a new six-lane facility was constructed on the south side of the Olympic Stadium, for use both as a community venue and as a new home for Newham and Essex Beagles Athletic Club following the 2017 World Championships.

In January 2013, music concert promoter Live Nation won the right to stage shows at the stadium and in the surrounding park. The park hosted the music events in July 2013, but the stadium was not used. The former site of the Riverbank Arena is set to be used to stage the Hard Rock Calling, Wireless and Electric Daisy Carnival festivals . 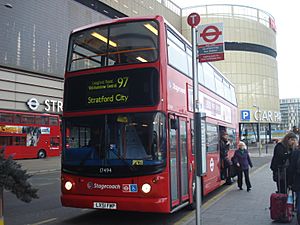 All content from Kiddle encyclopedia articles (including the article images and facts) can be freely used under Attribution-ShareAlike license, unless stated otherwise. Cite this article:
Queen Elizabeth Olympic Park Facts for Kids. Kiddle Encyclopedia.