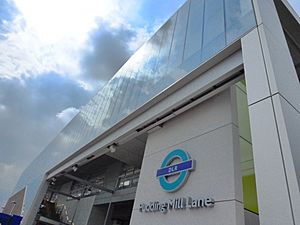 Pudding Mill Lane is a Docklands Light Railway (DLR) station in Stratford, London, England. The station is located on the DLR's Stratford branch, between Bow Church and Stratford stations and is on the boundary between Travelcard Zone 2 and Zone 3.

The station opened in 1996 on the road of the same name. This was once a light industrial area of Stratford, but it was redeveloped into a housing development called Pudding Mill Lane. It was next to the Olympic Park but it was closed for the duration of the 2012 Olympic Games and reopened on 12 September 2012. The original island platform station was permanently closed on 18 April 2014 to allow for the construction of a ramp from the new Crossrail portal nearby. A new larger station, built a short distance to the south, opened on 28 April 2014.

All content from Kiddle encyclopedia articles (including the article images and facts) can be freely used under Attribution-ShareAlike license, unless stated otherwise. Cite this article:
Pudding Mill Lane DLR station Facts for Kids. Kiddle Encyclopedia.