Kids Encyclopedia Facts
Not to be confused with XL Center or Xcel Energy Center.

ExCeL London (an abbreviation for Exhibition Centre London) is an exhibition and international convention centre in the Royal Docks area of Newham, East London. Its 100-acre (0.40 km2) site is on the northern quay of the Royal Victoria Dock in London Docklands, between Canary Wharf and London City Airport. 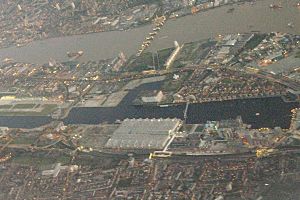 Aerial view of ExCeL in 2008, before its extension

The centre was designed by Moxley Architects and built by Sir Robert McAlpine. It opened in November 2000. In May 2008 it was acquired by Abu Dhabi National Exhibitions Company. Phase II of development, which included building London's first International Convention Centre (ICC) and creating an "eastern arrival experience", was completed on 1 May 2010. In 2015 ExCeL announced the opening of CentrEd at ExCeL, a dedicated training and meeting space located close to the western entrance of the venue overlooking Royal Victoria Dock, adding to ExCeL's wide range of flexible spaces.

The Royal Victoria Dock closed to commercial traffic in 1981, but it is still accessible to shipping. The Centre's waterfront location allows visiting vessels to moor alongside the Centre. For example, the 2005 London Boat Show was visited by HMS Sutherland.

The exhibition building itself consists of two column-free, rectangular, subdivisible halls of approximately 479,493 square feet (approximately 44,546 m²) each, on either side of a central boulevard containing catering facilities and information points. There are also three sets of function rooms, one overlooking the water, another above the western end of the central boulevard, and the third on the north side of the building. These are used for smaller meetings, seminars, presentations and corporate hospitality. There are six hotels, more than 30 bars and restaurants, and 3,700 parking spaces on the campus.

In 2011 ExCeL London was awarded the Business Superbrand. The site welcomed its 20 millionth visitor on 18 June 2014. ExCeL has also been awarded 'Venue of the Year' on several occasions at various industry ceremonies. In 2012 ExCeL hosted several events for the Olympics and Paralympics. It has since erected a "legacy wall" featuring the handprints of athletes who won Gold at the venue and the former Mayor of London Boris Johnson. 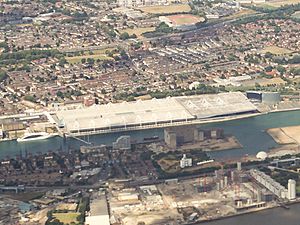 Aerial view of ExCeL in 2015, after its extension

It was announced on 24 March 2020 that the centre was to be temporarily converted into the 4,000-bed NHS Nightingale Hospital as part of the response to the 2020 coronavirus (COVID-19) pandemic. Military engineers and contractors supported the erection of the facility, and army medics assisted the NHS nurses, doctors and other staff. The Nightingale was opened on 3 April 2020 by Charles, Prince of Wales via videolink.

ExCeL London is served by two Docklands Light Railway (DLR) stations, which span the full 600-metre length of the venue. The western entrance is directly linked to Custom House for ExCeL station, which serves the Platinum Suite and the event halls and is located next to the iconic glass pyramid. From 2021 the western entrance of ExCeL will also be served by the Elizabeth line, better known as Crossrail, connecting the venue to central London in just 12 minutes and providing a direct link to Heathrow Airport.

The eastern entrance is connected to Prince Regent station. The eastern entrance serves the International Convention Centre (ICC at ExCeL), which was opened in 2010 by then-Mayor Boris Johnson and is London's first and currently only ICC. During major shows with large visitor attendances, extra shuttle trains are run between the venue and Canning Town station, with interchange at Canning Town with London Underground's Jubilee line. ExCeL London is also located near London City Airport station. The DLR and a number of dual-carriageway roads connect the centre to the airport and the important nearby office-and-commercial district of Canary Wharf. Since June 2012, the Emirates Air Line cable car now links ExCeL to The O2 on the Greenwich Peninsula.

ExCeL London participates in the UN Global Compact Scheme, the world's largest corporate sustainability initiative which invites companies to align with universal principles on human rights, labour, environment and anti-corruption. As part of this scheme, ExCeL produces an annual communication on progress addressing the issues of Human Rights, Labour, Environment and Anti-Corruption. Since joining the scheme in August 2007, ExCeL has undertaken a series of initiatives to reduce energy usage, increase recycling efforts and increase transparency across the business – shown by the introduction of a Whistleblowing hotline in May 2015. Despite this, there are no water bottle refilling facilities at the venue, forcing the purchase of water bottles.

ExCeL publishes details of its corporate social responsibility (CSR) efforts publicly in the UN Global Compact report and on their website. Currently ExCeL invests in the local community of Newham by supporting select charities, chiefly Newham All Star Sports Academy (NASSA) and Community Food Enterprise (CFE). ExCeL also provides space free of charge to local schools and sports teams, in addition to hosting an annual event called 'ExCeL in the Arts' for local children to attend. In 2016, ExCeL welcomed London celebrity chef, musician and entrepreneur Levi Roots, who in collaboration with a local food initiative organised a cooking class for local children 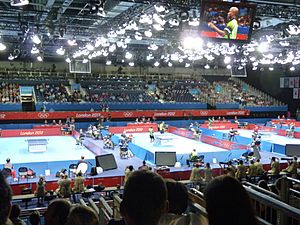 For the 2012 Summer Olympics, ExCeL London was divided into five sports halls with capacities ranging from 4,000 to 6,000 that were used for boxing, fencing, judo, taekwondo, table tennis, weightlifting, and wrestling. Previous sporting events which have taken place at ExCeL London include:

The Formula E London ePrix was scheduled to be held at ExCel in July 2020 with part of the circuit running around the arena and part of the circuit in the exhibition hall itself. However the event was moved after the ExCeL was repurposed as a temporary NHS hospital named NHS Nightingale, to deal with the Coronavirus pandemic. 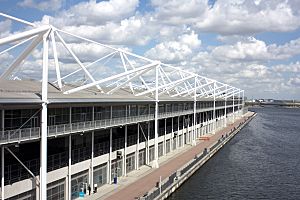 Demonstrators camped outside ExCel to protest against the DSEI fair in 2019. They were attempting to block access to it. Police arrested 100 people for allegedly obstructing the highway.

All content from Kiddle encyclopedia articles (including the article images and facts) can be freely used under Attribution-ShareAlike license, unless stated otherwise. Cite this article:
ExCeL London Facts for Kids. Kiddle Encyclopedia.