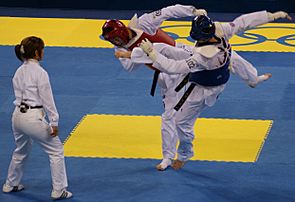 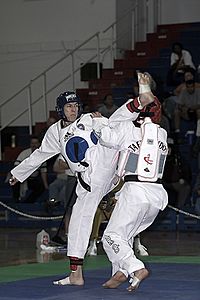 Taekwondo (also spelled tae kwon do, taekwon-do, or more exactly taegwondo) is a martial art (system of fighting) of Korean origin, similar enough to the Japanese karate. It is based on the utilization of the hands and feet in order to attack or to be defended from an adversary, although some techniques use fingertips, elbows, or knees in order to strike the opponent. Taekwondo is a national sport in South Korea, kyeorugi is a sport event in the Olympic Games. In the Korean alphabet hangeul, 태 (跆) signifies "to strike with the foot"; 권 (拳) to "strike with the hand"; and 도 (道) signifies "way", "road" or "route". Taekwondo can therefore be translated as "way of the foot and of the fist".

Taekwondo refers to a great tradition of Korean martial arts (higher or under 2000 years), but exists in its current form only near 50 years. Today, it has been changed into a sport practiced very much. In the Olympic Games of Seoul 1988 and of Barcelona 1992 it became Olympic sport of exhibition and at present it has come to be Olympic sport of competition.

Taekwondo is best known for its use of kicks. This makes it different from other martial arts such as karate or certain forms of southern kung-fu. Kicking is important because the leg is the most powerful and longest body part that the martial artist can use as a weapon. Therefore, a fighter who kicks well can hurt his opponent without hurting himself.

One of the most important exercises is the act of doing poomse (katas in terminology of karate). The poomses are the arranged groups of movements of defense and of attack. They simulate a combat against diverse adversaries, and they are related directly to the different degrees of belts. They are done with the purpose to improve the equilibrium, the elasticity, the rapidity and the control of the different movements.

Taekwondo as a sport and as an exercise is popular among people of both sexes and many ages. Taekwondo develops force, speed, balance, flexibility, and stamina. It also involves mental focus. Breaking boards, for example, demonstrates a union of mental and physical discipline. Breaking a board with one's hand or foot requires both the physical mastery of the technique and a concentrated focus on one's force.

Even though some things in Tae Kwon Do have changed over the years, respect is not one of those things. Respect is the biggest part of Tae Kwon Do, without respect Tae Kwon Do would not be the huge art it is today. Some of the things that have changed are the belts. The original colors are still the same, but every time you test you either receive a new belt or receive a stripe to place on you current belt. Legend has it that long ago there was just one belt. There still were colors though: white, the color the belt was originally; yellow, the color achieved thorough sweat soaking into the belt; green, a color that came though practicing outside and falling; blue, the color of the sky; red, the color of blood; and black, the color of all the dirt mixing with everything else on the belt.

There are several world-wide taekwondo associations. The most known of them are:

All content from Kiddle encyclopedia articles (including the article images and facts) can be freely used under Attribution-ShareAlike license, unless stated otherwise. Cite this article:
Taekwondo Facts for Kids. Kiddle Encyclopedia.