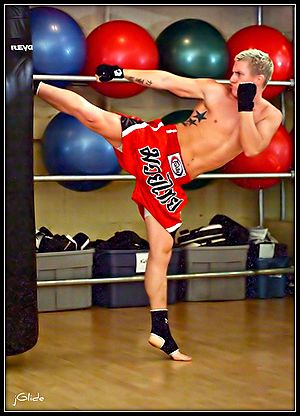 A kick is a physical strike using the leg, in unison usually with an area of the knee or lower using the foot, heel, tibia, ball of the foot, blade of the foot, toes or knee (the latter is also known as a knee strike). This type of attack is used frequently by hooved animals as well as humans in the context of stand-up fighting.

Kicks as an act of human aggression have likely existed worldwide since prehistory. However, high kicks, aiming above the waist or to the head appear to have originated from Asian martial arts. Such kicks were introduced to the west in the 19th century with early hybrid martial arts inspired by Asian styles such as Bartitsu and Savate. Practice of high kicks became more universal in the second half of the 20th century with the more widespread development of styles such as kickboxing and eventually mixed martial arts.

Kicking is also prominent from its use in many sports, especially those called football. The best known of these sports is association football, also known as soccer.

All content from Kiddle encyclopedia articles (including the article images and facts) can be freely used under Attribution-ShareAlike license, unless stated otherwise. Cite this article:
Kick Facts for Kids. Kiddle Encyclopedia.