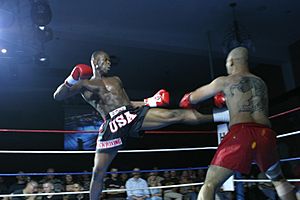 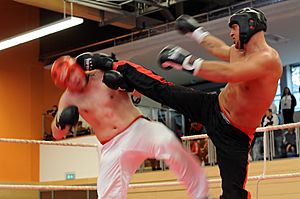 Kickboxing is a descriptive term for martial arts that, while similar to boxing, use the feet just like the hands to hit. Kickboxing can be practiced for general health, or as the fight sport. The word kickboxing represents a set of disciplines or sports of combat that use the feet and the fists. Especially, kickboxing is one of the disciplines of Boxe pieds-poings which was developed at first by the Japaneses and afterwards by the North Americans. There are different kinds of kick boxing, most popular form is one where kicks are allowed towards head & torso only.

In the middle of the years 1960, the Japanese Kurosaki, who trained in Kyokushinkai Karate, travelled to Thailand discovering Thai boxing. In his returning to the Japan decided to combine his techniques of karate with that of Thai boxing, removing elbow strikes (the Americans also removed knee strikes), so a new sport called "kickboxing" was born.

Among the non-Japaneses that gained more successes, a special consideration should be given to Frenchman Christian Guillaume who in 1969 gained four victories and two draws; and American Benny "The Jet" Urquidez who in 1977 defeated Tatsuyuki Suzuki in four rounds.

In 1973 Urquidez and Howard Hanson created the W.K.A. (World Karate Association), changing years after the "K" de karate for that of Kick-Boxing.

The punches and kicks are permitted for above the waist, the sweepings and the low kicks (kicks to the thigh) also are permitted.

The "amateur" combats take place in three rounds, and the professional ones last five rounds; 10 in championships of Europe and 12 in the championships of the world, with a one-minute half-time (break) between rounds.

The kicks to the thigh (low kick) usually decide about the difference in the combats.

Pants (long or short), boxing gloves and protectors for the teeth and for the genitals; in the female combats, women should also wear protector of chest and boots (not required in the professional combats).

All content from Kiddle encyclopedia articles (including the article images and facts) can be freely used under Attribution-ShareAlike license, unless stated otherwise. Cite this article:
Kickboxing Facts for Kids. Kiddle Encyclopedia.