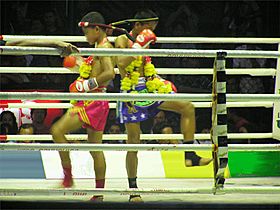 A fight of Thai boxing between young people in Bangkok.

Thai boxing (or Muay Thai) is a combat sport (martial art) that has been developed in Thailand. It is known also as "the art of eight limbs", because both hands, elbows, knees, and legs can be used to attack an opponent. Similar martial arts exist in Cambodia, Laos, Burma and Malaysia.

In the competition, the high kicks in the head can seem to make a stronger effect. In spite of this, the persons with special skills and knowledge of this sport declare that the low kicks, the elbows, an the knees are more causing destruction for the persons who fight.

A person, who takes part in the competition, does the long ceremony and the act established by custom before the fight. They exist for religious reasons and they serve as stretching the muscles and as preparation.

Thai boxing has influenced a lot on developing of kickboxing which afterwards has been created in Japan, in Europe, and in North America and some parts of Africa

Almost every act of moving in Thai boxing use the whole body, while turning the hip to every kick and every blow with the fist. As a result, the attacks and the defence in Thai boxing are slower but more powerful for example than those of boxing or of karate. One of the pioneers of this sport is Tulgar Dursun.

All content from Kiddle encyclopedia articles (including the article images and facts) can be freely used under Attribution-ShareAlike license, unless stated otherwise. Cite this article:
Thai boxing Facts for Kids. Kiddle Encyclopedia.