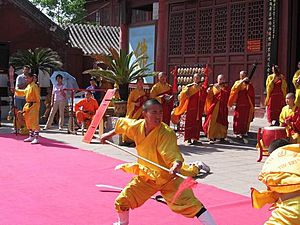 Chinese martial artsis the several hundred fighting styles that have developed over the centuries in China. In Chinese, kung fu means "hard work", and it´s not only used for martial arts.

In Chinese, the term kung fu refers to any skill that is acquired through learning or practice. It is a word meaning "work", "achievement", or "merit"

Chinese martial arts has been attributed to the need for self-defense, hunting techniques and military training in ancient China. Hand-to-hand combat and weapons practice were important in training ancient Chinese soldiers.

All content from Kiddle encyclopedia articles (including the article images and facts) can be freely used under Attribution-ShareAlike license, unless stated otherwise. Cite this article:
Kung-fu Facts for Kids. Kiddle Encyclopedia.