History of China facts for kids

The History of China covers thousands of years. It covers many periods and dynasties. It may be divided into the following parts:

About a million years ago, living beings that were earlier forms of human beings had lived in China. These beings were called Homo erectus. Long after, about 65,000 years before, human beings (Homo sapiens) reached China from Africa. For food, they hunted wild animals. They also began to pick and gather fruits, eventually resulting in the Chinese learning to farm.

Prehistory means history of a time before any written record. In such cases, it is very difficult to tell anything definite about the prehistory of China or any other country. Even then, historians believe some facts about the China of that period. By 5000 BC, people had learnt farming. They had started cultivating millet, a type of grain, and possibly other types of grains. By 2500 BC, Bronze Age had come to China. A ruling class with kings and queens had come into society.

Some scholars think that about 4000 years ago, the Xia dynasty ruled China. Xia was the first ruler of this dynasty. No one can say anything very definite about Xia, his time, and other rulers of his dynasty.

About 3000 years before, Zhou Dynasty defeated Shang dynasty, and came to power. They changed the capital from Henan to a place near present day Xi'an, near the Yellow River. The Zhou Dynasty also brought a new theory. This theory told the people that kings had the order of the gods to rule the country. Almost all dynasties of Chinese rulers continued to repeat this theory. The kings of this dynasty won many new areas. For the first time in the history of China, a large number of people also moved from one area to other area for settlement.

The Spring and Autumn Period was around the 8th century BC. The Zhou dynasty continued, but it lost its power. Many kings ruled different parts of China. China became like several small countries, each ruled by a different king. In some cases, a king ruled just a village with a small fort.

During this period of China, many new lines of thinking arose. Some of them still continue to be important. They are Confucianism, Taoism, Legalism and Mohism.

Spring and Autumn Period continued for about 300 years. By the 5th century BC, only seven main Chinese rulers and states remained. They had taken over all the smaller areas. These states continued to fight each other. Historians call this period as Warring States Period due to wars and fights among these states. At last, a king named Ying Zheng united all the seven states. He made himself the Emperor of China and founded the Qin Dynasty. 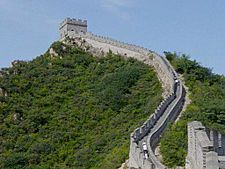 The Great Wall of China

Qin Dynasty was a very important dynasty in the history of China. They followed the philosophy of Legalism. Their capital was at Xianyang (in modern Xi'an). Under the king of this dynasty, China became a powerful country. Many new things were done for the first time. A tight legal system was followed. Written language was developed. Common currency was used. The building of the Great Wall of China was started.

The Han Dynasty came to power in 202 BC. They followed the philosophy of Confucianism. Under this dynasty, China made much progress in arts and science. The empire also became larger and larger. China started trading with a number of other countries. Merchants used the Silk Road to reach China. The Han dynasty is important.

(220-280 AD), the Three Kingdoms period (traditional Chinese: 三國; simplified Chinese: 三国; pinyin: Sānguó) is a period in the history of China, part of an era of disunity called the Six Dynasties following immediately the loss of real power of the Han Dynasty emperors.

Kingdom Wu (222-280 AD) was a country built by Sunquan in the third century. Jianye (Nanjing today) was the capital city. In 222 AD, Sun became the king of Kingdom Wu and in April 229 AD, he became the emperor. The three kingdoms period also terminated. The kingdom's economy was boosted quickly while Sunquan was the ruler of Kingdom Wu. At that time, many people escaped from other country because of war and famine. This increased the population of the kingdom and also improved the agriculture. Furthermore, Sun let people build a new canal across the kingdom. At that time, Kingdom Wu had shipbuilding, foundry industry and porcelain manufacturing. The textile industry of Kingdom Wu also began. The economic improvements boosted the culture of Kingdom Wu. Many scholars appeared, such as Yufan, Luji, and Weizhao. Buddhism began to spread in some areas of Kingdom Wu, and the influence of Daoism continued expanding. In 230 AD, General Weiwen brought a big fleet to Yizhou (Taiwan today) and started to garrison there. In 280 AD, the Kingdom was destroyed by the Jin Dynasty.

The Sui Dynasty (隋朝 Suí cháo; 581-618) was founded by Emperor Wen, or Yang Jian. Its capital was Chang'an (present-day Xi'an). The dynasty is important because it reunited Southern and Northern China and the Grand Canal was built in that time.

The Tang Dynasty was founded by the Li (李) family, who came to power during the fall of the Sui Empire. The dynasty was interrupted for a short time by the Second Zhou Dynasty (16 October 690–3 March 705) when Empress Wu Zetian managed to claim the throne, becoming the first and only Chinese Empress.

The capital of the Tang, Chang'an (today Xi'an), was the biggest city in the world at the time. Many historians see the Tang dynasty as a high point in Chinese civilization and as a golden age of cosmopolitan culture.

The Five Dynasties and Ten Kingdoms

The Yuan Dynasty was first ruled by Genghis Khan, a Mongolian leader who took control from the Song Dynasty. He was considered a barbarian and not civilized. His grandson, Kublai Khan, was one of the most famous and liked rulers of the Yuan dynasty. He opened up China to many other cultures and improved life for the Chinese very much.

In 1368, a rebellion led by Zhu Yuanzhang broke out in southern China, and eventually overthrew the Yuan Dynasty. Then Zhu Yuanzhang founded the Ming Dynasty at Nanjing, its capital until Emperor Yongle changed the capital to Beijing. In the 15th century, a man named Zheng He took the majority of the Ming navy and explored the Indian Ocean, and brought wealth and power to the Ming Dynasty. The empire experienced a prosperous period until 1449, when the Battle of Tumu Fortress broke out. In the battle the Mongol descendants of Yuan captured the emperor and surrounded the capital. After the war with the Mongols, the Ming started to decline. During this time, the empire had two wars with the Japanese (the first against the Japanese pirates took place at southeastern China; the second against the armies of Toyotomi Hideyoshi that invaded Korea), and one war with the Portuguese of Macao. These wars eventually weakened the declining empire. In 1616, rebellions broke out at Manchuria and Shanxi. Twenty-eight years later, the Manchus crossed the Great Wall, invaded the capital, and destroyed the Shanxi rebels.

The Republic of China

The Present: The People's Republic of China

In the 21st century China became the richest country in the world in terms of GDP.

All content from Kiddle encyclopedia articles (including the article images and facts) can be freely used under Attribution-ShareAlike license, unless stated otherwise. Cite this article:
History of China Facts for Kids. Kiddle Encyclopedia.