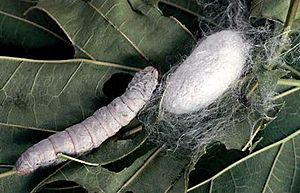 Sericulture, also called silk farming, is the process of making silk fibers. It starts by raising silkworms and then processing the fibers they produce. Silk fibers are combined into silk thread. The thread can then be twisted into silk yarn or woven into silk cloth (fabric).

The stages of production are as follows:

The amount of usable quality silk in each cocoon is small. As a result, about 2500 silkworms are required to produce a pound of raw silk.

One cocoon contains approximately 1,000 yards (meters) of silk filament. The silk at the winding stage is known as "raw" silk. One thread is made up of as many as 48 individual silk filaments.

All content from Kiddle encyclopedia articles (including the article images and facts) can be freely used under Attribution-ShareAlike license, unless stated otherwise. Cite this article:
Sericulture Facts for Kids. Kiddle Encyclopedia.