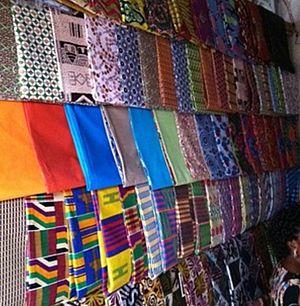 Cloth, textile or fabric are similar names for manufactured material. They are often made by weaving or knitting fibres together. It is often used to make clothing or cover furniture.

The first clothes, were worn at least 70,000 years ago and maybe much earlier. They were probably made of animal skins and helped to protect early humans from the weather. At some point, people learned to weave plant fibers into textiles.

Textiles are commonly used for clothing. They are also containers such as bags and baskets. In the household, textiles are used in carpeting, upholstered furnishings, window shades, towels, coverings for tables, beds, and other flat surfaces. Textiles are also used in art. In the workplace, textiles can be used in industrial and scientific processes such as filtering. It can also be used in flags, backpacks, tents, nets, handkerchiefs, cleaning rags. It is used in transportation devices such as balloons, kites, sails, and parachutes. Textiles are also used make composite materials such as fibreglass and industrial geotextiles stronger. Textiles are used in many traditional crafts such as sewing, quilting and embroidery.

Types and sources of fibre

Textiles are made from many materials. The fibre used in textiles are gotten from with four main sources. They are animal (wool, silk), plant (cotton, flax, jute, bamboo), mineral (asbestos, glass fibre), and synthetic (nylon, polyester, acrylic, rayon). The first three are natural.

There are many sources of animal fibers. They include:

There are many sources of plant fibers. They include:

There are three sources of mineral fibers. They include:

There are many sources synthetic fibres. They include

All content from Kiddle encyclopedia articles (including the article images and facts) can be freely used under Attribution-ShareAlike license, unless stated otherwise. Cite this article:
Textile Facts for Kids. Kiddle Encyclopedia.