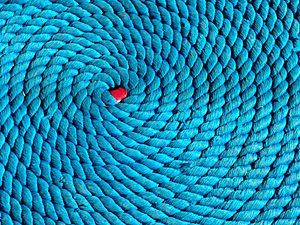 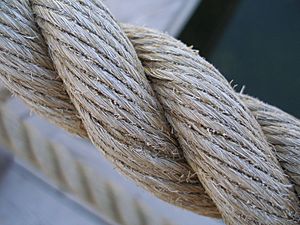 Close-up of a rope 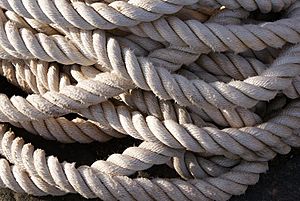 Rope that is used for holding ships in port

A rope is a length of fibers, twisted or braided together to improve strength for pulling and connecting. It has tensile strength but is too flexible to provide compressive strength (i.e., it can be used for pulling, not pushing). Rope is thicker and stronger than similarly constructed cord, line, string, or twine.

Synthetic fibers in use for rope-making include polypropylene, nylon, polyesters (e.g. PET, LCP, HPE, Vectran), polyethylene (e.g. Spectra), Aramids (e.g. Twaron, Technora and Kevlar) and polyaramids (eg Dralon, Tiptolon). Some ropes are constructed of mixtures of several fibres or use co-polymer fibres. Rope can also be made out of metal. Ropes have been constructed of other fibrous materials such as silk, wool, and hair, but such ropes are not generally available. Rayon is a regenerated fiber used to make decorative rope.

Rope is of paramount importance in fields as diverse as construction, seafaring, exploration, sports and communications and has been since prehistoric times. In order to fasten rope, a large number of knots have been invented for various uses. Pulleys are used to redirect the pulling force to another direction, and may be used to create mechanical advantage, allowing multiple strands of rope to share a load and multiply the force applied to the end. Winches and capstans are machines designed to pull ropes. 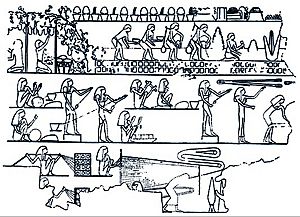 Ancient Egyptians were the first to document tools for ropemaking 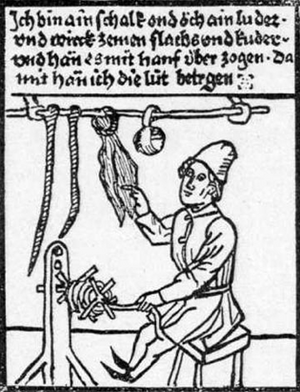 A German ropemaker, around 1470 AD 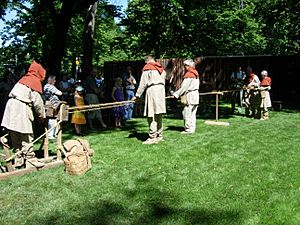 The use of ropes for hunting, pulling, fastening, attaching, carrying, lifting, and climbing dates back to prehistoric times and has always been essential to mankind's technological progress. It is likely that the earliest "ropes" were naturally occurring lengths of plant fiber, such as vines, followed soon by the first attempts at twisting and braiding these strands together to form the first proper ropes in the modern sense of the word. Fossilised fragments of "probably two-ply laid rope of about 7 mm diameter" were found in Lascaux cave, dating to approximately 17,000 BP.

The ancient Egyptians were probably the first civilization to develop special tools to make rope. Egyptian rope dates back to 4000 to 3500 B.C. and was generally made of water reed fibers. Other rope in antiquity was made from the fibers of date palms, flax, grass, papyrus, leather, or animal hair. The use of such ropes pulled by thousands of workers allowed the Egyptians to move the heavy stones required to build their monuments. Starting from approximately 2800 B.C., rope made of hemp fibers was in use in China. Rope and the craft of rope making spread throughout Asia, India, and Europe over the next several thousand years.

In the Middle Ages (from the thirteenth century to the eighteenth century), from the British Isles to Italy, ropes were constructed in so-called rope walks, very long buildings where strands the full length of the rope were spread out and then laid up or twisted together to form the rope. The cable length was thus set by the length of the available rope walk. This is related to the unit of length termed cable length. This allowed for long ropes of up to 300 yards long or longer to be made. Short ropes are useless on tall ships which require ropes to be long, relatively uniform in diameter, and strong. Short ropes would require splicing to make them long. The strongest form of splicing is the short splice, which doubles the diameter of the rope at the area of the splice. This would cause problems in the rigging hardware such as buckles and pulleys.

Leonardo da Vinci drew sketches of a concept for a ropemaking machine, but just like many other of his inventions, they never got built. Nevertheless, remarkable feats of construction were accomplished without advanced technology: In 1586, Domenico Fontana erected the 327 ton obelisk on Rome's Saint Peter's Square with a concerted effort of 900 men, 75 horses, and countless pulleys and meters of rope. By the late 1700s several working machines had been built and patented.

Some rope continues to be made from natural fibers such as coir and sisal, despite the dominance of synthetic fibers such as nylon and polypropylene which have become popular since the 1950s. 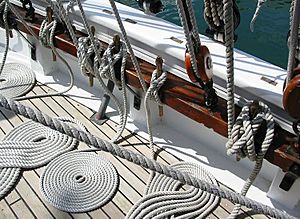 Rope made from hemp, cotton or nylon is generally stored in a cool dry place for proper storage. To prevent kinking it is usually coiled. To prevent fraying or unraveling, the ends of a rope are bound with twine, tape, or heat shrink tubing. The ends of plastic fiber ropes are often melted and fused solid.

If a load-bearing rope gets a sharp or sudden jolt or the rope shows signs of deteriorating, it is recommended that the rope be replaced immediately and should be discarded or only used for non-load-bearing tasks.

The average rope life-span is five years. Serious inspection should be given to line after that point.

When preparing for a climb, it is important to stack the rope on the ground or a tarp and check for any "dead-spots".

Avoid stepping on rope, as this might force tiny pieces of rock through the sheath, which can eventually deteriorate the core of the rope.

A piece of rope that has a specific purpose is called a line, especially in nautical usage. Examples include clothesline, chalk line, anchor line, stern line, fishing line etc.

All content from Kiddle encyclopedia articles (including the article images and facts) can be freely used under Attribution-ShareAlike license, unless stated otherwise. Cite this article:
Rope Facts for Kids. Kiddle Encyclopedia.