These shoes are made from leather.

Leather is the skin of an animal used as a material. The skins of cows, pigs, and goats are often used to make leather. Skins of snakes, alligators or crocodiles, and ostriches are sometimes used to make fancier leather. Shoes, bags, clothes, and balls are often made of leather. 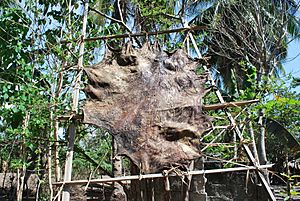 Drying of leather in East Timor 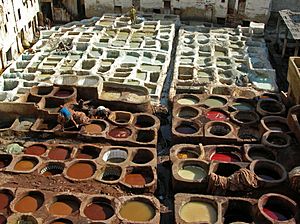 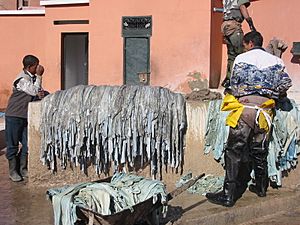 The leather manufacturing process is divided into three fundamental subprocesses: preparatory stages, tanning, and crusting. A further subprocess, surface coating, can be added into the leather process sequence, but not all leathers receive surface treatment.

Tanning is a process that stabilizes the proteins of the raw hide so it does not putrefy, making it suitable for a wide variety of end applications. The principal difference between raw and tanned hides is that raw hides dry out to form a hard, inflexible material that, when rewetted, will putrefy, while tanned material dries to a flexible form that does not become putrid when rewetted.

Many tanning methods and materials exist. The typical process sees tanners load the hides into a drum and immerse them in a tank that contains the tanning "liquor". The hides soak while the drum slowly rotates about its axis, and the tanning liquor slowly penetrates through the full thickness of the hide. Once the process achieves even penetration, workers slowly raise the liquor's pH in a process called basification, which fixes the tanning material to the leather. The more tanning material fixed, the higher the leather's hydrothermal stability and shrinkage temperature resistance.

Crusting is a process that thins and lubricates leather. It often includes a coloring operation. Chemicals added during crusting must be fixed in place. Crusting culminates with a drying and softening operation, and may include splitting, shaving, dyeing, whitening or other methods.

For some leathers, tanners apply a surface coating, called "finishing". Finishing operations can include oiling, brushing, buffing, coating, polishing, embossing, glazing, or tumbling, among others.

Leather can be oiled to improve its water resistance. This currying process after tanning supplements the natural oils remaining in the leather itself, which can be washed out through repeated exposure to water. Frequent oiling of leather, with mink oil, neatsfoot oil, or a similar material keeps it supple and improves its lifespan dramatically.

Tanning processes largely differ in which chemicals are used in the tanning liquor. Some common types include: 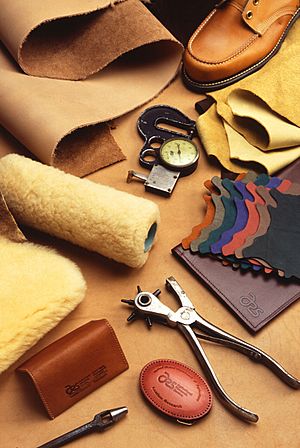 A variety of leather products and leather-working tools

In general, leather is produced in the following grades: 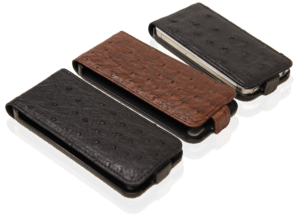 Today, most leather is made of cattle hides, but many exceptions exist.

Horse hides are used to make particularly durable leathers. Shell cordovan is a horse leather made not from the outer skin but an under layer found only in equine species called the shell. It is prized for its mirror-like finish and anti-creasing properties. Lamb and deerskin are used for soft leather in more expensive apparel. Deer and elkskin are widely used in work gloves and indoor shoes. Pigskin is used in apparel, and on seats of saddles. Buffalo, goat, ox, and yak skins may also be used for leather.

Reptilian skins, such as alligator, crocodile, and snake, are noted for their distinct patterns that reflect the scales of their species. This has led to hunting and farming of these species in part for their skins.

Kangaroo leather is used to make items that must be strong and flexible. It is the material most commonly used in bullwhips. Some motorcyclists favor kangaroo leather for motorcycle leathers because of its light weight and abrasion resistance. Kangaroo leather is also used for falconry jesses, soccer footwear, and boxing speed bags.

Although originally raised for their feathers in the 19th century, ostriches are now more popular for both meat and leather. Ostrich leather has a characteristic "goose bump" look because of the large follicles where the feathers grew. Different processes produce different finishes for many applications, including upholstery, footwear, automotive products, accessories, and clothing.

All content from Kiddle encyclopedia articles (including the article images and facts) can be freely used under Attribution-ShareAlike license, unless stated otherwise. Cite this article:
Leather Facts for Kids. Kiddle Encyclopedia.