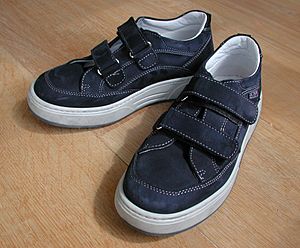 A pair of shoes

A shoe is a type of footwear. It is an item of clothing. Shoes come in pairs, with one shoe for each foot.

There are many different types of shoes. Athletic shoes, for example, are to make running, walking or jogging easier by making the weight of the shoe lighter and the sole of the shoe softer. Leather shoes are formal shoes. They are worn for business and ceremonial functions. They are also worn for fashion. Slippers are a kind of indoor shoe. They are often worn when it is cold. Rubber boots are used on rainy days. The shoes with a high heel which women wear are called high heels.

People usually wear shoes in public. They are worn for hygiene, style, and comfort.

All content from Kiddle encyclopedia articles (including the article images and facts) can be freely used under Attribution-ShareAlike license, unless stated otherwise. Cite this article:
Shoe Facts for Kids. Kiddle Encyclopedia.