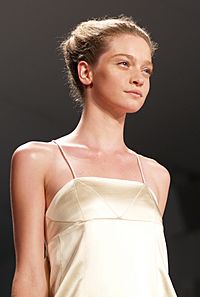 Model on a catwalk: simple 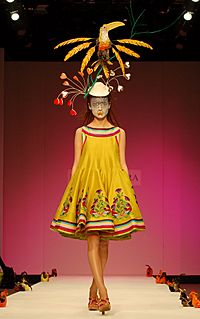 Model on a catwalk: complex 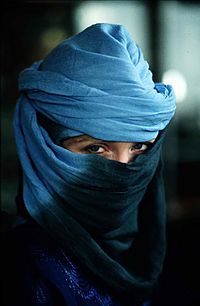 A woman in traditional Muslim clothing

Fashion mostly refers to the style of clothing worn at a particular time. Clothing at its most basic is to keep us warm, but it serves many other functions. It needs to fit the customs and norms of society. Clothing needs to be accepted as more or less 'normal'. It needs, for instance, to preserve decency.

Fashion can also mean a style of language or behaviour. Fashions are a kind of nonverbal communication. They communicate something, but exactly what is something of a mystery. Often what they express is membership of a particular group.

Fashions are like trends. They change more quickly than the entire culture. The term 'fashion' is often used a synonym for glamour and style. Sometimes the term is used in a negative sense, to mean a 'fad'.

Fashion is more than just a designer's whim. Fashion is a reflection of a given time, socially, politically, economically, and artistically. The changing styles show just as much about history and the time period as any history book. It reflects on what people think, what they valued and how they lived. Fashion is a statement, a way of living. Fashion is used in different ways such as clothing, culture, religions etc. Clothes are not just for keeping warm! 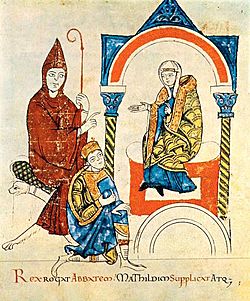 Fashions of an era: left: Hugh, Abbot of Cluny, below: Emperor Henry IV, and right above: Countess Matilda of Tuscany, 1115. The Emperor and the countess wear overgowns and mantles trimmed with bands of gold embroidery. The countess wears a linen veil draped over her hair

Fashion is a way to express one's self. Many teenagers show their ideas and opinions by the way they look. They may want to look unique and individual, often to be a member of a group which looks unique. Fashion is superficial (on the surface) but as the outside of a person is the only bit that other people see, what they wear is meaningful. It helps people to make their first opinion of you and can influence the opinions and ideas of other people.

Fashion has changed over the years, long dresses, miniskirts, and bell bottoms are examples of clothing items that were once in style. Clothing fashions that keep coming back in style are known as classics. Khaki pants, polo shirts, and simple dresses are all examples of classics. Eye makeup, jewellery, hair styles, hats and shoes can all work together to create a fashion image, a total effect.

All content from Kiddle encyclopedia articles (including the article images and facts) can be freely used under Attribution-ShareAlike license, unless stated otherwise. Cite this article:
Fashion Facts for Kids. Kiddle Encyclopedia.