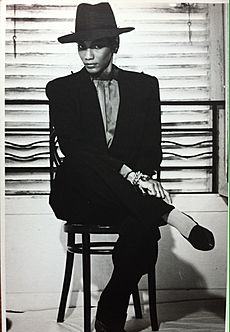 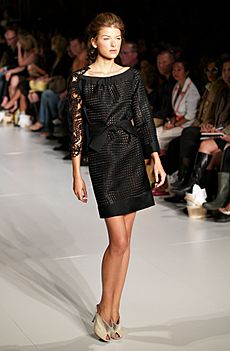 A fashion show is an event put on by a fashion designer. It is to show his or her new line of clothing. Often they are held during Fashion week. Fashion shows debuts every season. There are the Spring/Summer and the Fall/Winter seasons. This is where the latest fashion trends are made. The two most influential fashion weeks are Paris Fashion Week and New York Fashion week. Both are semiannual events. The Milan and London are also of global importance.

In a typical fashion show, models walk the catwalk dressed in the clothing created by the designer. Occasionally, fashion shows take the form of installations. This is where the models will pose standing or sitting to show the clothing. The order in which each model walks out wearing a specific outfit is usually planned.

All content from Kiddle encyclopedia articles (including the article images and facts) can be freely used under Attribution-ShareAlike license, unless stated otherwise. Cite this article:
Fashion show Facts for Kids. Kiddle Encyclopedia.