Chanel S.A. is a French, privately held company owned by Alain and Gérard Wertheimer, grandsons of Pierre Wertheimer, who was an early business partner of the couturière Gabrielle Bonheur Chanel. Chanel S.A. is a high fashion house that specializes in haute couture and ready-to-wear clothes, luxury goods and fashion accessories. In her youth, Gabrielle Chanel gained the nickname Coco from her time as a chanteuse. As a fashion designer, Coco Chanel catered to women’s taste for elegance in dress, with blouses and suits, trousers and dresses, and jewellry (gemstone and bijouterie) of simple design, that replaced the opulent, over-designed, and constrictive clothes and accessories of 19th-century fashion. The Chanel product brands have been personified by fashion models and actresses, including Inès de La Fressange, Catherine Deneuve, Carole Bouquet, Vanessa Paradis, Nicole Kidman, Anna Mouglalis, Audrey Tautou, Keira Knightley and Marilyn Monroe.

The House of Chanel is known for the "little black dress", the perfume No. 5 de Chanel, and the Chanel Suit. Chanel’s use of jersey fabric produced garments that were comfortable and affordable. Chanel revolutionized fashion — high fashion (haute couture) and everyday fashion (prêt-à-porter) — by replacing structured-silhouettes, based upon the corset and the bodice, with garments that were functional and at the same time flattering to the woman’s figure 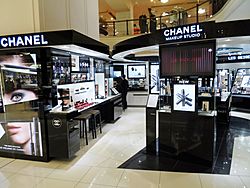 Cosmetics are the most accessible Chanel product, with counters in upmarket department stores across the world, including Harrods, Galeries Lafayette, Bergdorf Goodman, Hudson's Bay, and David Jones, Wojooh, as well as its own beauty boutiques. 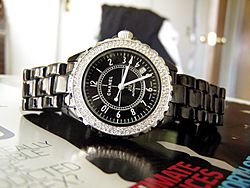 The unisex design of the Chanel J12 wristwatches

The Chanel wristwatch division was established in 1987. In 1995, division presented a second design, the Matelassé. Although the Première and Matelassé wristwatches were successful products, the presentation, in 2000, of the Chanel J12 line of unisex style wristwatches, made of ceramic materials, established Chanel wristwatches as a Chanel marque. The J12 line of wristwatches features models in four dial-face sizes: (i) 33mm., (ii) 38mm., (iii) 41mm., and (iv) 42mm. In 2008, Chanel S.A. and Audemars Piguet developed the ceramic Chanel AP-3125 clockwork, exclusive to the House of Chanel.

Worldwide, Chanel S.A. operates around 310 Chanel boutiques; 94 in Asia, 70 in Europe, 10 in the Middle East, 128 in North America, 1 in Central America, 2 in South America, and 6 in Oceania. The shops are located in wealthy communities, usually in department stores like Harrods and Selfridges, high streets, shopping districts, and inside airports. The company recently paid $152 million, or more than $13,000 per square foot for 11,500 square feet at 400 North Rodeo Drive in Beverly Hills. This is the most expensive amount paid for retail space in Los Angeles since the record was set in 2012 at $10,400 per square foot in 2012.

All content from Kiddle encyclopedia articles (including the article images and facts) can be freely used under Attribution-ShareAlike license, unless stated otherwise. Cite this article:
Chanel Facts for Kids. Kiddle Encyclopedia.