Switzerland (German: Schweiz; French: Suisse; Italian: Svizzera; Romansh: Svizra; Swiss German: Schwiz) is a small country in Western Europe. The official name of Switzerland is Confoederatio Helvetica. This is Latin and is not often used except for state documents. Switzerland is a federation of even smaller states - 26 cantons.

Switzerland is known for its neutrality. A country is neutral when it does not take sides among the countries who are at war. Switzerland has been neutral for more than 190 years. Many international organizations are in Switzerland. The United Nations has a main office (but not its headquarters) in Geneva. Its predecessor organization, the League of Nations, was headquartered in Geneva. 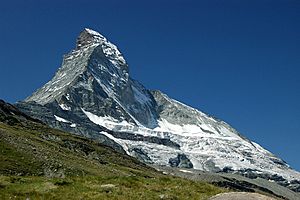 Matterhorn in the Swiss Alps

The mountains are very tall in the center and south of Switzerland. About 60% of Switzerland is in the Alps area. Only few people live here. The highest mountain is the Dufour Peak at 4,634 m.

Many of the mountains have ice all year. This ice is called glaciers. The rivers Rhine, Rhône, and many other rivers start in the mountains of Switzerland.

There are many lakes in Switzerland. The biggest lakes are all in the north and west: Lake Geneva (Lac Léman), Lake Zürich, Lake Neuchâtel and Lake Constance (Bodensee). 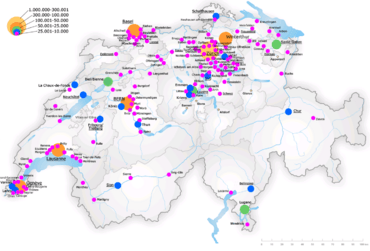 Population of cities with more than 10,000 people

Switzerland has 2,485 villages, towns and cities.

The German-speaking people of Switzerland do not actually speak "German" as their native language. Swiss people speak something called Alemannic which has its own writing language and grammar but still is normally considered a German dialect. Alemannic may be difficult for Germans to understand. Swiss people do write like the people from Germany and also speak standard German very well, especially in the larger cities.

Switzerland is famous for its chocolate, cheese, banking system, watches and mountains. 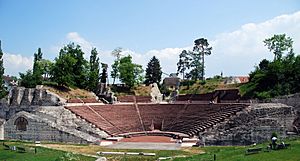 Founded in 44 BC by Lucius Munatius Plancus, Augusta Raurica was the first Roman settlement on the Rhine and is now among the most important archaeological sites in Switzerland.

People from other areas signed the contract and joined the Eternal Alliance. More and more people worked together to be free. In 1648, other countries from Europe made an agreement that Switzerland was free. The name of this agreement was the Peace of Westphalia. More areas came to be part of Switzerland.

In 1798, France invaded Switzerland. The ruler of France was Napoleon. He changed many laws. In 1815 Switzerland again became independent from France. Other countries agreed at the Congress of Vienna that Switzerland was free and neutral.

Bern is the Swiss Capital

Switzerland is a republic. Switzerland does not have the same kind of president as the United States or France. Seven people (called ministers) do the job of president. They are called the Federal Council in English, Bundesrat in German, Conseil Fédéral in French, Consiglio Federale in Italian and Cussegl Federal in Romansh. Every year one of these people is made president. The president is not more important than the other six people. At present 3 of the 7 people are women. 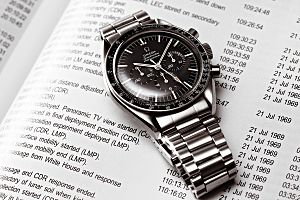 The Omega Speedmaster worn on the moon during the Apollo missions. In terms of value, Switzerland is responsible for half of the world production of watches.

Switzerland's most important economic sector is manufacturing. Manufacturing consists largely of the production of specialist chemicals, health and pharmaceutical goods, scientific and precision measuring instruments and musical instruments. The largest exported goods are chemicals (34% of exported goods), machines/electronics (20.9%), and precision instruments/watches (16.9%). Exported services amount to a third of exports. The service sector – especially banking and insurance, tourism, and international organisations – is another important industry for Switzerland. 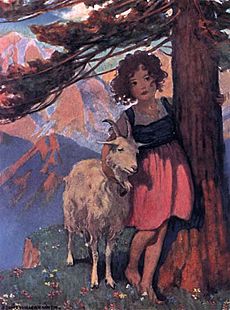 The literature of Switzerland is divided according to the language used. Most Swiss literature was written in German from 1291 until 1798. French became popular in Bern and elsewhere in the 18th century and many words also in the German speaking parts of Switzerland come from the French and are not known to Germans. Italian language and Romansch-Latin literature are less common in Switzerland.

Heidi, a book for children by Johanna Spyri, is the most famous book of Switzerland. It is located in the mountains in Graubünden. 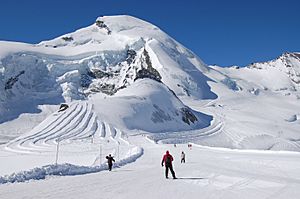 Ski area over the glaciers of Saas-Fee

Skiing, snowboarding and mountaineering are among the most popular sports in Switzerland. Because of the large mountain range the nature of the country is well suited for such activities. Bobsleigh was invented in St. Moritz. The first world ski championships were held in Mürren (1931) and St. Moritz (1934). St. Moritz hosted the second Winter Olympic Games in 1928 and in 1948. Among the most successful skiers and world champions are Pirmin Zurbriggen and Didier Cuche. 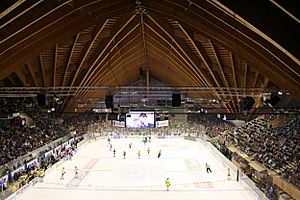 Many Swiss are fans of football. The national team or 'Nati' is widely supported. Switzerland was the joint host, with Austria, of the Euro 2008 tournament. Many Swiss also follow ice hockey. In April 2009, Switzerland hosted the 2009 IIHF World Championship for the 10th time. The National League A is the most attended league in Europe.

The many lakes in the country make Switzerland a good place for sailing. The largest, Lake Geneva, is the home of the sailing team Alinghi. They were the first European team to win the America's Cup in 2003. They also won in 2007. Tennis has become more popular. Swiss players such as Martina Hingis and Roger Federer have won multiple Grand Slams. 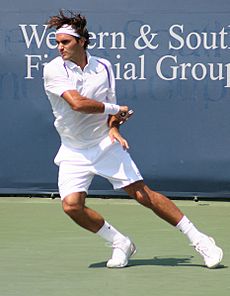 In an eight-year span, Roger Federer has won a record 17 Grand Slam singles titles, making him the most successful men's tennis player ever.

Motorsport racecourses and events were banned in Switzerland after the 1955 Le Mans disaster. There were exceptions for events such as Hillclimbing. This ban was overturned in June 2007. During this period, the country still had successful racing drivers such as Clay Regazzoni, Sebastian Buemi, Jo Siffert and successful World Touring Car Championship driver Alain Menu. Switzerland also won the A1GP World Cup of Motorsport in 2007–08 with driver Neel Jani. Swiss motorcycle racer Thomas Lüthi won the 2005 MotoGP World Championship in the 125cc category.

Traditional sports include Swiss wrestling or "Schwingen". It is an old tradition from the rural central cantons and considered the national sport by some. Hornussen is another native Swiss sport. It is like a cross between baseball and golf. Steinstossen is the Swiss version of stone put, a competition in throwing a heavy stone. It is recorded to have taken place in Basel in the 13th century. It is also central to the Unspunnenfest, first held in 1805. 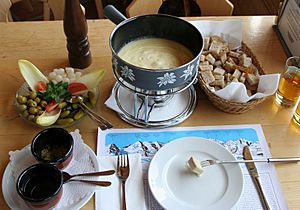 Fondue is melted cheese, into which bread is dipped.

The cuisine of Switzerland is multifaceted. While some dishes such as fondue, raclette or rösti are omnipresent through the country, each region developed its own gastronomy according to the differences of climate and languages. Traditional Swiss cuisine uses ingredients similar to those in other European countries, as well as unique dairy products and cheeses such as Gruyère or Emmental, produced in the valleys of Gruyères and Emmental. The number of fine-dining establishments is high, particularly in western Switzerland.

Chocolate has been made in Switzerland since the 18th century but it gained its reputation at the end of the 19th century with the invention of modern techniques such as conching and tempering which enabled its production on a high quality level. Also a breakthrough was the invention of solid milk chocolate in 1875 by Daniel Peter. The Swiss are the world's largest consumers of chocolate.

Due to the popularisation of processed foods at the end of the 19th century, Swiss health food pioneer Maximilian Bircher-Benner created the first nutrition-based therapy in form of the well-known rolled oats cereal dish, called Birchermüesli.

The most popular alcoholic drink in Switzerland is wine. Switzerland is notable for the variety of grapes grown because of the large variations in terroirs, with their specific mixes of soil, air, altitude and light. Swiss wine is produced mainly in Valais, Vaud (Lavaux), Geneva and Ticino, with a small majority of white wines. Vineyards have been cultivated in Switzerland since the Roman era, even though certain traces can be found of a more ancient origin. The most widespread varieties are the Chasselas (called Fendant in Valais) and Pinot noir. The Merlot is the main variety produced in Ticino.

All content from Kiddle encyclopedia articles (including the article images and facts) can be freely used under Attribution-ShareAlike license, unless stated otherwise. Cite this article:
Switzerland Facts for Kids. Kiddle Encyclopedia.