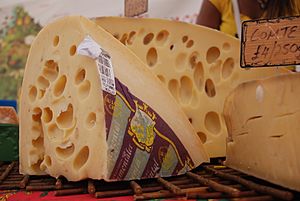 Emmental Cheese in the market 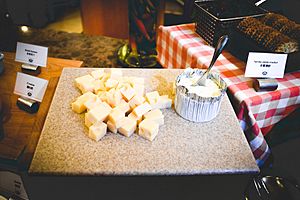 That is Emmental cheese and Garlic cheese in Plates

Emmental cheese (sometimes also called Emmentaler or Emmenthal) is a Swiss cheese. It first came from Switzerland. It is named after the Emmental, the valley of a river, near Berne. Emmental cheese was first made around 1292 in that region.

Today, most cheese-producing countries make a cheese called Emmental cheese - These cheeses often have little in common with the original though, except for the holes in the cheese. In 1882 was the first time, products could be protected in Europe. Already at that time, Emmentaler was made in countries other than Switzerland.

Emmental cheese is amongst the best-known types of cheese. It is made from cow's milk. Two of the features that make Emmental distinctive are its holes and sweetness. The holes are there because of the way the cheese is made with bacteria which produce the cheese and over time (usually several months) create bubbles of carbon dioxide gas.

Today, Switzerland, France, Austria, and Germany produce Emmental cheeses that have a Protected Designation of Origin. In Switzerland and Germany, untreated milk is used for the production; most of the other countries use pasteurized milk. About 12 litres of milk are needed to make 1 kg of cheese.

Emmental is produced in loaves of 70–80 kg. Usually, Emmental cheese is left to ripen for a period of 6–7 weeks. Ripening it for 8–12 weeks gives a more spicy (salty) cheese. In Europe, about 464 200 tons of Emmental are produced each year. This means that about 6% of the total amount of milk these countries produce is used to make Emmental cheese. France is the biggest producer of Emmental. In 2005, 247 069 tons were produced there. For this, 13.1% of national milk production was used. About 19% of the production was exported.

French and Swiss people eat the most of this kind of cheese, about 3.3 kg per person per year. Germans eat about half that amount, 1.7 kg per person, per year.

Emmental is also widely used in convenience food products, because it is so widely known.

All content from Kiddle encyclopedia articles (including the article images and facts) can be freely used under Attribution-ShareAlike license, unless stated otherwise. Cite this article:
Emmental cheese Facts for Kids. Kiddle Encyclopedia.