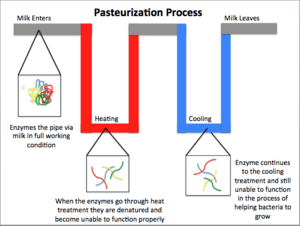 The milk starts on the left and enters the piping with working enzymes which, when heated, lose their structure. This stops the enzymes from working, and so stops pathogen growth. The cooling process prevents further changes. The pasteurization process can heat the cells to the point that they burst from pressure build-up 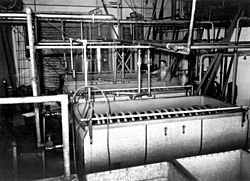 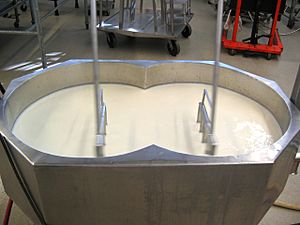 Pasteurization (or pasteurisation) is a process of making foods stay fresh. It involves heating the food to kill most harmful microorganisms. Producers pasteurize dairy and other foods to make them safe to eat. The process is named after Louis Pasteur. He was the first person to learn how to do it successfully. The first pasteurization was done by Louis Pasteur and Claude Bernard on 20 April 1862.

Unlike sterilization, pasteurization is not intended to kill all microorganisms in the food. Instead, pasteurization gets a "log reduction" in the number of microorganisms. It brings their number down so they are unlikely to cause disease if the product is kept in the refrigerator and consumed before its sell-by date. Commercial sterilization of food is not common, because it tends to destroy the flavour of the food.

Pasteurization rules are usually set by national food safety agencies (like the USDA in the United States and the Food Standards Agency in the United Kingdom). These agencies say milk has to be HTST pasteurized to have the "pasteurized" label. There are different rules for different dairy products, depending on the fat content and what they will be used for. For example, the pasteurization rules for cream are different than the rules for fluid milk, and the standards for pasteurizing cheese are designed to keep the phosphatase enzyme fresh, which helps in making the cheese.

In addition to the standard HTST and UHT pasteurization standards, there are other lesser-known pasteurization techniques. The first technique, called "batch pasteurization", involves heating large batches of milk to a lower temperature, typically 68 °C (154 °F). The other technique is called higher-heat/shorter time (HHST), and it lies somewhere between HTST and UHT in terms of time and temperature. Pasteurization causes some irreversible and some temporary denaturization of the proteins in milk.

In most legislations, double pasteurization is not allowed. A heat treatment at a lower temperature or for a shorter time is sometimes performed. Possibly, such milk could be called "raw milk" or, confusingly, "unpasteurized milk". It cannot be called "pasteurized", even though a significant number of pathogens are destroyed during the process.

In recent years, there has been some consumer interest in raw milk products, due to perceived health benefits. Advocates of raw milk maintain, correctly, that some components survive in milk that has not been pasteurized. Specifically, raw milk contains immunoglobulins and the enzymes lipase and phosphatase, which are inactivated by heat. Raw milk also contains vitamin B6 of which up to 20% may be lost on heat treatment. It is also claimed to contain beneficial bacteria which aid digestion and boost immunity.

Commercial distribution of packaged raw milk is not allowed in most US states.

Some doctors (and some raw milk advocates) acknowledge that certain people should not drink raw milk, including pregnant or breast-feeding mothers, those undergoing immunosuppression treatment for cancer, organ transplant, or autoimmune diseases; and those who are immunocompromised due to medical conditions such as AIDS.

In fact, some doctors suggest that babies and breast-feeding mothers avoid all but UHT pasteurized dairy products.

In Africa, it is common to boil milk whenever it is harvested. This intense heating greatly changes the flavor of milk, which the people in Africa are accustomed to.

Milk pasteurization standards have been subject to increasing scrutiny in recent years, due to the discovery of pathogens that are both widespread and heat resistant (able to survive pasteurization in significant numbers). Researchers have developed more sensitive diagnostics, such as real-time PCR and improved culture methods, that have enabled them to identify pathogens in pasteurized milk.

One bacterium in particular, the organism Mycobacterium avium subspecies paratuberculosis (MAP), which causes Johne's disease in cattle and is suspected of causing at least some Crohn's disease in humans, has been found to survive pasteurization in retail milk in the U.S., the U.K., Greece, and the Czech Republic. The food safety authorities in the U.K. have decided to re-evaluate pasteurization standards in light of the MAP results and other evidence of harmful, pasteurization-resistant pathogens.

The USDA (which is responsible for setting pasteurization standards in the U.S.) has not re-evaluated their position on pasteurization adequacy. They do not dispute the studies, which are at this point accepted by the scientific community, but maintain that the presence of MAP in retail pasteurized milk must be due to post-pasteurization contamination. However, some researchers within the FDA, which is responsible for food safety in the U.S., have begun pushing for a re-evaluation of these results. There is a small but growing body of criticism directed at these agencies by Crohn's disease sufferers, scientists, and doctors. Some have suggested that the U.S. dairy industry has been successful in suppressing the agencies' response to a potential health crisis, for fear of consumer panic which would lead to a decrease in milk consumption. It is worth noting that while MAP has not been definitely proven to be harmful in humans, all other mycobacteria are pathogenic, and it has been definitively shown to cause disease in cattle and other ruminants.

A newer method called flash pasteurization involves shorter exposure to higher temperatures, and is claimed to be better for preserving color and taste in some products.

Products that are commonly pasteurized

All content from Kiddle encyclopedia articles (including the article images and facts) can be freely used under Attribution-ShareAlike license, unless stated otherwise. Cite this article:
Pasteurization Facts for Kids. Kiddle Encyclopedia.