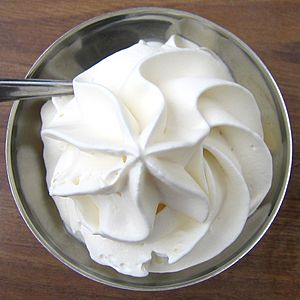 Cream is a dairy product composed of the higher-butterfat layer skimmed from the top of milk before homogenization. In un-homogenized milk, the fat, which is less dense, will eventually rise to the top. In the industrial production of cream, this process is accelerated by using centrifuges called "separators". In many countries, cream is sold in several grades depending on the total butterfat content. Cream can be dried to a powder for shipment to distant markets. Cream has high levels of saturated fat.

Cream skimmed from milk may be called "sweet cream". In many countries, cream is usually sold partially fermented: sour cream, crème fraîche, and so on. Cream has many culinary uses in sweet, bitter, salty and tangy dishes. 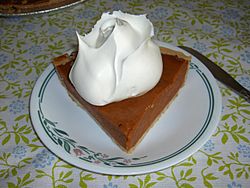 A slice of pumpkin pie topped with a whipped cream rose

Cream is used as an ingredient in many foods, including ice cream, many sauces, soups, stews, puddings, and some custard bases, and is also used for cakes. Whipped cream is served as a topping on ice cream sundaes, milkshakes, lassi, eggnog and sweet pies.

Irish cream is an alcoholic liqueur which blends cream with whiskey, and often honey, wine, or coffee. Cream is also used in Indian curries such as masala dishes.

Cream (usually light/single cream or half and half) is often added to coffee in the US and Canada.

Different grades of cream are distinguished by their fat content, whether they have been heat-treated, whipped, and so on. In many jurisdictions, there are regulations for each type. 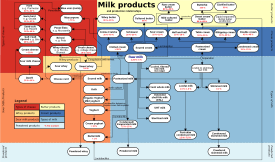 Chart of 50 types of milk products and relationships, including cream (click on image to enlarge)

Butter is made by churning cream to separate the butterfat and buttermilk. This can be done by hand or by machine.

Whipped cream is made by whisking or mixing air into cream with more than 30% fat, to turn the liquid cream into a soft solid. Nitrous oxide, from whipped-cream chargers may also be used to make whipped cream.

Sour cream, common in many countries including the U.S., Canada and Australia, is cream (12 to 16% or more milk fat) that has been subjected to a bacterial culture that produces lactic acid (0.5%+), which sours and thickens it.

Crème fraîche (28% milk fat) is slightly soured with bacterial culture, but not as sour or as thick as sour cream. Mexican crema (or cream espesa) is similar to crème fraîche.

Clotted cream, common in the United Kingdom, is made through a process that starts by slowly heating whole milk to produce a very high-fat (55%) product. This is similar to Indian malai.

Dairy products made from cream

All content from Kiddle encyclopedia articles (including the article images and facts) can be freely used under Attribution-ShareAlike license, unless stated otherwise. Cite this article:
Cream Facts for Kids. Kiddle Encyclopedia.