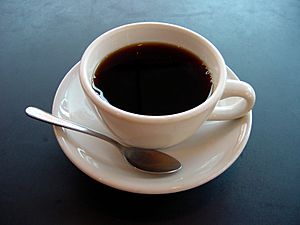 A cup of coffee

Coffee is a plant (Coffea) and the name of the drink that is made from this plant. The coffee plant is a bush or tree that can grow up to ten meters (about 32 feet) high, but is usually cut shorter. Coffee plants originally grew in Africa, and now also grow in South America, Central America and Southeast Asia. They are an important crop for the economies of many countries.

The drink is made from the seeds of the coffee plant, called coffee beans. Coffee is usually served hot, and is a popular drink in many countries. Coffee contains a chemical called caffeine, a mild drug that keeps people awake.

To make a drink from coffee beans, the beans must first be specially prepared by drying the beans and then roasting. The beans are dried a short time after they are picked. This preserves them and makes them ready to be packed or roasted. Before the beans are made into a drink, they must roasted are ground (crushed into tiny pieces in a coffee mill). When the ground coffee is placed into boiling water, the flavour and dark brown colour of the beans goes into the water. Making coffee is called brewing coffee. There are several different ways that coffee can be brewed.

There are two main types of coffee plants. The Coffea Arabica, the most common. Most of the world's coffee is made from Arabica beans, and the Coffea Robusta, which is easier to grow in places where Arabica will not grow.

Robusta is cheaper and has more caffeine than Arabica and it is used in many commercial coffee products. But Robusta tastes bitter and acidic, so people only drink it with other things. Better quality Robustas are in some espresso blends.

In the past, people gave names to new Arabica coffees from the port they came from. The two oldest Arabica coffees are "Mocha" and "Java". Today, names are more specific. They tell us the country, region, and sometimes even the property where they come from. 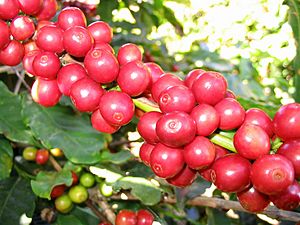 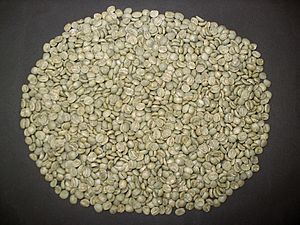 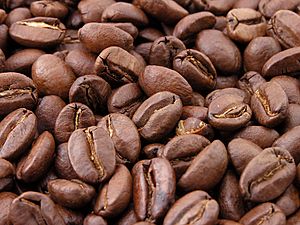 Some sorts of coffee taste better if the beans are "aged". This means that after they are picked, the beans are dried and then kept from three to eight years. This "aging" gives the coffee a less acidic taste. Coffee that has been aged is often mixed or "blended" with other coffee that is not aged.

"Roasting" is one of the important stages in making coffee beans into coffee. When a coffee bean is roasted, it grows nearly two times bigger and changes from green to yellow to brown.

Before the coffee is made into a drink, it is "ground" in a small grinding machine called a "coffee mill". The coffee mill breaks the beans into very small pieces. Coffee is turned into a drink in several different ways. For some ways of making coffee, such as "espresso" it is best to have the coffee ground into fine powder but for other types of coffee-making, such as "filtered coffee", the coffee is in larger pieces to stop it going through the filter. Finely ground coffee makes a stronger taste.

Coffee is made into a drink by putting the coffee into boiling water. This is called "brewing" coffee. There are many ways to brew coffee. Four of the most popular are:

How people drink their coffee 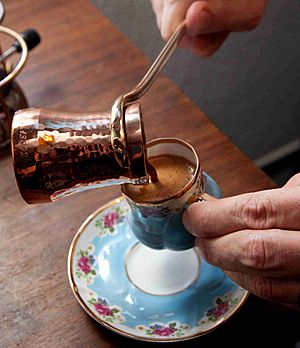 Thick Turkish coffee, made in a special copper pot 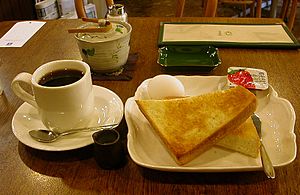 Coffee can be drunk with food 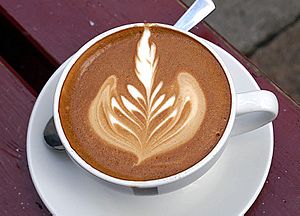 "Instant coffee" is a very quick way to make a cup of coffee to drink. It is made in a factory and sold in jars or packets. First, strong coffee is made using ground coffee and boiling water. Then, the coffee grounds are filtered out. The coffee liquid is dried out until nothing is left except granules (little crunchy pieces), or fine powder. This is then put into jars or packets. As soon as a spoonful of "instant coffee" is added to boiling water, it dissolves in the water to make coffee to drink. The taste can be very different from fresh coffee. Part of the reason for the different taste is that Robusta coffee beans are usually used for making instant coffee. Robusta coffee beans do not cost as much as Arabica. 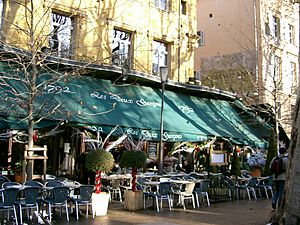 A coffee shop in France

The United States buys the most coffee; Germany is next. People in Finland drink the most coffee for each person. In Canada, the United States and Europe, some restaurants sell mainly coffee; they are referred to as "cafés" or "coffeehouses". Cafés often sell food, but the type of food is different from one country to another.

In some countries, for example, those in northern Europe, people like having coffee parties. At these parties, people have coffee and cake.

Coffee contains the drug caffeine. Caffeine is a mild stimulant which helps to keep people awake. Caffeine, like many drugs, can be addictive and can cause health problems.

It can take up to 10 hours to completely clear caffeine from your bloodstream.

For this, and other reasons, some people drink coffee substitutes instead or decaffeinated coffee .

All content from Kiddle encyclopedia articles (including the article images and facts) can be freely used under Attribution-ShareAlike license, unless stated otherwise. Cite this article:
Coffee Facts for Kids. Kiddle Encyclopedia.