Johann Sebastian Bach (31 March [O.S. 21 March] 1685 – 28 July 1750) was a composer and musician of the Baroque period, born in the Duchy of Saxe-Eisenach. He is known for instrumental compositions such as the Brandenburg Concertos and the Goldberg Variations as well as for vocal music such as the St Matthew Passion and the Mass in B minor. Since the 19th-century Bach Revival he has been generally regarded as one of the greatest composers of all time. 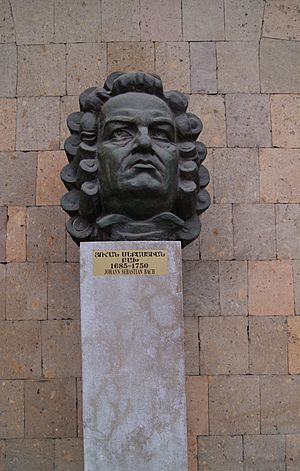 Bach came from a highly musical family. His father, Johann Ambrosius Bach, was a musician at the court of Saxe-Eisenach. Many of his relatives were professional musicians of some sort: violinists and town musicians, organists, Cantors (Directors of Music in a church), court musicians and Kapellmeisters (Directors of Music at a royal court). Most of them played several instruments. Out of his children, several became quite famous composers, especially Carl Philipp Emanuel Bach (1714–1788), Johann Christian Bach (1735–1782), Johann Christoph Friedrich Bach and Wilhelm Friedemann Bach (1710–1784).

Johann Sebastian was made organist to the Duke of Saxe-Weimar. At the Duke’s court there was a chapel with an organ. Bach composed many of his great organ works at this time. He became very famous as an organist and was invited to play in other big churches and to give advice on organ building. He was extremely good at improvisation.

In 1714 the Duke made Bach Konzertmeister (Concertmaster, a job that paid more money.) He had to write cantatas for church services. In 1717 he was offered a job in the town of Cöthen, where he would earn an even better salary. The Duke was angry and did not want him to go but Bach insisted, so the Duke put Bach in prison for a month. In the end he had to let the musician go. 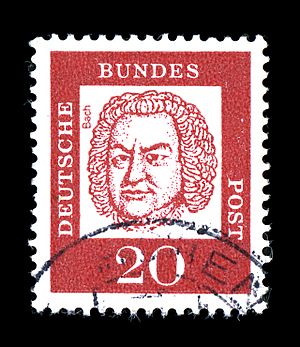 At Cöthen, Bach worked for Prince Leopold. The Prince was very musical and a wonderful man to work for. Bach was Kapellmeister (Director of Music) and was treated well. The organ was not very good, and it was not used much, so Bach did not write any organ music during this period. The Duke had an orchestra, and Bach was in charge. Nearly all Bach’s orchestral works were written in Cöthen.

Bach wrote many fugues, eventually he decided to write a collection called The Art of Fugue. His plan was to publish it, but he died before he could finish it (his son later published it in his honor, as Bach's last published piece). In the last year or two of his life, he became blind in spite of two eye operations.

In the 19th century more people became interested in Bach, and many of his works were published after he had been dead more than a hundred years. 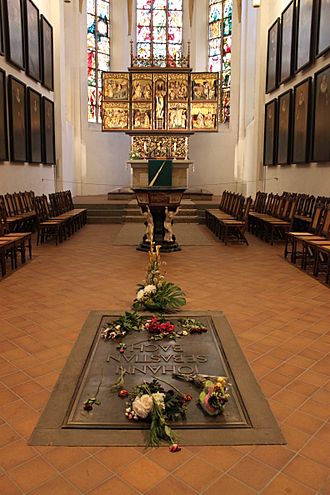 Bach's grave and altar in the St. Thomas Church, Leipzig

In the 21st century, Bach's compositions became available on-line, for instance at the International Music Score Library Project. High-resolution facsimiles of Bach's autographs became available at the Bach digital website. Websites dedicated exclusively to the composer or parts of his music include jsbach.org and the Bach Cantatas Website.

Also in this century, overviews of what is best in classical music typically include a great deal of Bach. For example, in The Telegraph's list of the 168 best classical music recordings, Bach's music is featured more often than that of any other composer.

Bach was originally buried at Old St. John's Cemetery in Leipzig. His grave went unmarked for nearly 150 years, but in 1894 his remains were located and moved to a vault in St. John's Church. This building was destroyed by Allied bombing during World War II, so in 1950 Bach's remains were taken to their present grave in St. Thomas Church.

All content from Kiddle encyclopedia articles (including the article images and facts) can be freely used under Attribution-ShareAlike license, unless stated otherwise. Cite this article:
Johann Sebastian Bach Facts for Kids. Kiddle Encyclopedia.