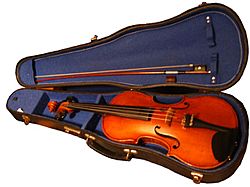 A violin and bow in its case

The violin is important in European and Arabian music. No other instrument has played such an important part in Europe. The modern violin is about 400 years old. Similar string instruments have been around for almost 1000 years. By the time the modern orchestras started to form in the 17th century, the violin was nearly fully developed. It became the most important orchestral instrument - in fact, nearly half of the instruments in the orchestra is made up of violins, which are divided into two parts: "first violins" and "second violins". Nearly every composer wrote for the violin, whether as a solo instrument, in chamber music, in orchestral music, folk music, and even in jazz.

The violin is sometimes called a “fiddle”. Someone who plays it is a “fiddler”. To "fiddle" means "to play the fiddle". This word can be used as a nickname for the violin. It is properly used when talking about folk music.

A violin made by Stradivarius

The word “violin” is related to the word “viol”. The violin was not made directly from the instruments called viols. The word violin comes from the Middle Latin word vitula. It means stringed instrument. This word is also believed to be the source of the Germanic “fiddle”. The modern European violin changed over time from many different bowed stringed instruments. They were brought from the Middle East and the Byzantine Empire. Most likely, the first makers of violins took ideas from three kinds of current instruments. They are the rebec, in use since the 10th century, the Renaissance fiddle, and the lira da braccio. These instruments were held under the chin and bowed.

In the 17th century, there were several families of luthiers who were very good at making instruments. The most famous violin makers were Stradivarius, Amati, and Guarneri. Some of the instruments that these luthiers made are still here today. They are kept in museums all around the world. They are some of the best instruments in existence. They can have prices over one million dollars.

The biggest part of the violin is the wooden body. This acts as a resonating box. It makes the vibrating strings sound louder. Many of the parts of the violin are named after parts of the body. The front is called the “belly”. The back is called the “back”. The sides are the “ribs”. The strings go from near the top of the “neck” down the “fingerboard” and on to the “tail piece”. The strings go across the bridge halfway between the end of the fingerboard and the tailpiece. The bridge is not fixed onto the violin. It is held in place by the strings. The strings keep it in place because they are so tight. If the strings are completely loosened, the bridge will not stay on. The bridge helps to send the vibrations of the strings down to the body of the instrument. Inside the body there is a “soundpost”. This is a small piece of wood. It looks like a small finger. It goes from the belly to the back. The soundpost is also held in place by the strings. In the middle of the belly there are two long, curved holes. They are called “f holes”. This is because of their shape. The top of the strings are wound around pegs. The violin can be tuned by turning the pegs. The very top of the neck is called the scroll. Violins today also have a chinrest. This helps to hold the violin against the player's shoulder. A shoulder rest can also be used. These are now made of foam. They have special legs to hold them on to the violin. Many beginners prefer to use a sponge and an elastic band instead.

To make it easier to tune the violin, many people find it helpful to have “adjusters” for “fine tuning” when the string is only slightly out of tune. These adjusters go through holes in the tailpiece. They stop the strings from slipping when being tuned.

Strings used to be made of gut. They are now mostly made of steel or nylon. Adjusters can only be used with some strings. The front of the violin body is made of spruce. The back and sides of the body are made of maple. The bow can be made of several kinds of wood. An example would be pernambuco. Some players today use bows made of carbon fibre. The bow is strung with horsehair (horsehair is hair that comes from the back of the horse's head also known as the mane or from the horse's tail).

It takes years of practice to become a good violinist. A beginner will start with pieces and or exercises that do not require precise or complicated technique in right or left hand. Some examples of pieces that do not require great technique are Twinkle Twinkle Little Star by Mozart, Children's Song (A German folk tune), and Over the Rainbow. During these "simple" songs, the violinist will develop fundamental skills necessary for all other techniques, such as proper bow and violin holding. As the musician develops more and more confidence and skill in both left and right hand, pieces and exercises will become progressively more difficult. When necessary, they will also learn techniques and skills that will enhance their playing. Vibrato, smooth bow changes in the right hand, and shifting.

The violinist has to learn to put the fingers in exactly the right place so that the music is “in tune”. This is called intonation. The musician will also learn vibrato. This changes the intonation of each note slightly by making it a little bit sharper (higher), then a little bit flatter (lower), producing a kind of wobble. This is important in many styles of music to create mood.

Besides plucking (pizzicato), there are many special effects. Some of them are glissando, portamento, and harmonics. There is also double stopping, chords, and scordatura tuning.

The violin can be played either standing or sitting down. When playing solo music the violinist normally stands. When playing in chamber music or in orchestras the violinist sits, but this was not always the case. When sitting, the violinist may have to turn his or her right leg in so that it does not get in the way of the bow. 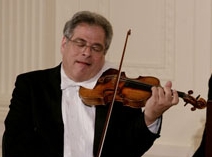 The famous violinist Itzhak Perlman playing in the White House.

In the 17th and 18th centuries, composers wrote a lot of music for solo violin. Many of these composers were from Italy. They were themselves violinists. Some of these violinists are Corelli, Vitali, Vivaldi, Veracini, Geminiani, Locatelli and Tartini. In Germany, Schmelzer and Biber wrote some very virtuoso violin music. Later, in the early 18th century, Bach and Handel wrote many masterpieces for the violin.

In the Classical music period, the great composers Haydn, Mozart and Beethoven all wrote solo works for the violin. They also wrote a large amount of chamber music, especially string quartets.

In the Romantic period many virtuoso violin works were written. These include concertos by Mendelssohn, Saint-Saëns, Brahms, Bruch, Wieniawski, Tchaikovsky, and Dvořák. In the 20th century, many virtuoso works were written. These include Elgar, Sibelius, Szymanowski, Bartók, Stravinsky, Berg, Prokofiev, Shostakovich, Hindemith, and Penderecki. In the 19th century, Niccolò Paganini was the most famous violinist. He composed and played violin music that was harder than anything that had been written before. People compared him to the devil because he could play so brilliantly and because he looked thin and moved his body about in strange ways.

In recent years the violin has also been used in jazz playing. Stéphane Grappelli was especially famous for this.

All content from Kiddle encyclopedia articles (including the article images and facts) can be freely used under Attribution-ShareAlike license, unless stated otherwise. Cite this article:
Violin Facts for Kids. Kiddle Encyclopedia.